Home > News > Bring your own boat with Dockwise

If you think Dockwise Yacht Transport (DYT) is all about transporting mega yachts to exotic destinations, you’re only half correct. Certainly, DYT’s fleet of four semi-submersible ships easily accommodate yachts over 100 feet, and even 200 feet, but the service is also popular with owners of recreational fishing and cruising boats, which means it isn’t unusual to see a 40- or 50-footer embarking on an adventure that starts and/or ends with a DYT voyage. 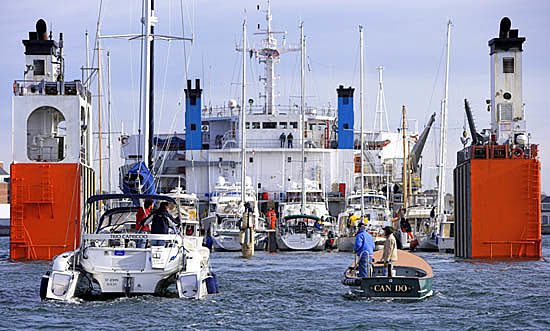 This summer, for boat owners wanting to explore the Mediterranean, DYT is offering a special round-trip package deal that will deliver their vessels — large, small or any size in between -- aboard the super ship Yacht Express from Ft. Lauderdale, Fla., or Newport, R.I., in early August, to Sardinia, Italy, in late August. From there, owners, their families and friends can explore the magnificent Costa Smeralda, meander down the Italian and French Rivieras to coastal Spain and journey onward to the Balearic Islands and Palma de Mallorca, where Super Servant 4 is scheduled to arrive in late October for the return trip to Ft. Lauderdale and Newport.

“With the roundtrip package, this is a great opportunity for owners who have thought about using our service to give it a try,” said DYT President Clemens van der Werf, who explained that DYT’s float-on/float-off service, overseen by expert DYT loading masters, allows for gentle loading and unloading of vessels while port-to-port delivery is speedy and safe, with vessels tucked securely into dry, protected, specially-designed holding bays. “It’s especially perfect for owners who have dreamed of cruising the Med on their own boats that don't have the cruising range to get there.”

After transporting their 47’ Nordhavn motor yacht with DYT, Milt Baker (Fort Lauderdale, Fla.) and his wife and cruising partner, Judy, are now DYT converts. “We took Bluewater across the Atlantic on its own bottom for the adventure of it,” said Milt. “Two years later when it came time to bring the yacht back to the USA, we called on Dockwise Yacht Transport because we wanted a quick and easy trip. The professionals at DYT made everything easy, from good counsel on readying the yacht for transport to hassle-free loading and unloading. We drove the boat aboard Super Servant 3 in Palma, Mallorca, and 16 days later we drove it off in Fort Lauderdale. Except for a little salt spray, the yacht was in exactly the same shape when she arrived in Florida as when we left her in Mallorca.”

Headquartered in Ft. Lauderdale, Fla., DYT is a wholly owned subsidiary of Dockwise Ltd. (Hamilton, Bermuda), the global leader in maritime transports and installation. Since its maiden voyage in 1987, the company has transported over 10,000 motor and sailing yachts to various destinations around the globe, offering owners and charterers safe and easy access to many of the world’s premier cruising grounds. DYT’s largest ship, the 687.5-foot (209 meter) Yacht Express, was christened in 2007 and is the largest vessel of its kind in the world. The ship features amenities such as complimentary cabins for ride-aboard crew, an atrium with swimming pool, restaurant and cinema, as well as conference, media and fitness facilities.