Home > News > Bringing their A-game: Nobiskrug on the future of yachting

With an exclusive fleet of 10 superyachts that span over nearly two decades, the chances that you will see a Nobiskrug yacht on the water are, indeed, rare. This custom German builder has made it its profession to deliver handcrafted pieces of art to some of the most discerning clients around the world since their first superyacht launch in 2000. One could argue that the reason for Nobiskrug’s exclusive fleet is the fact that the yard deals with some of the most complex and challenging one-off projects, never backing off from a project simply because it has never been done before – a venture that might appeal only to a handful of an already very select group of individuals. 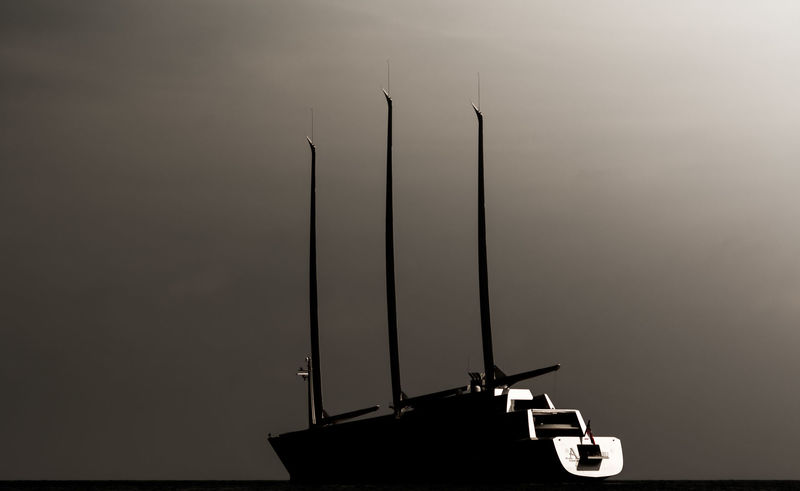 Photo: Tom van Oossanen / SuperYacht TimesThe truth is that when you talk about innovation, customisation and ground-breaking engineering in the yachting business, Nobiskrug is one of the few shipyards that’s really worth mentioning. From their very first project, the 92.4-metre Tatoosh, to their latest masterpiece, the radical 142.8-metre Sailing Yacht A, innovation is at the heart of each of their boats. For this special issue, therefore, we met up with shipyard Managing Director, Holger Kahl to discuss all things innovative to help define others’ perception of the term.

“Innovation for me is to develop a yacht, a real customised ship that adheres to and factors in all regulations without compromising on the owner’s vision.” Kahl’s answer to the question, ‘what does innovation mean to you?’ is a very clear indicator of the shipyard’s approach to their projects. Understanding that real change happens from deep within the yacht itself and not necessarily what is visible to the outside world, forms the foundation of each of their unique builds.

This philosophy rings true for perhaps nine out of Nobiskrug’s 10 completed projects. The exception here no doubt being the colossal Sailing Yacht A with its imposing and multifaceted exterior in addition to a dizzying maze of interconnected systems hidden throughout the inside of the vessel. Kahl sees the split reaction to the project as a good thing and hopes it might inspire more owners to take the same route. “I like these controversial discussions because this is somehow firing up the market as there may be other clients that pick that up and develop other ideas out of that.” 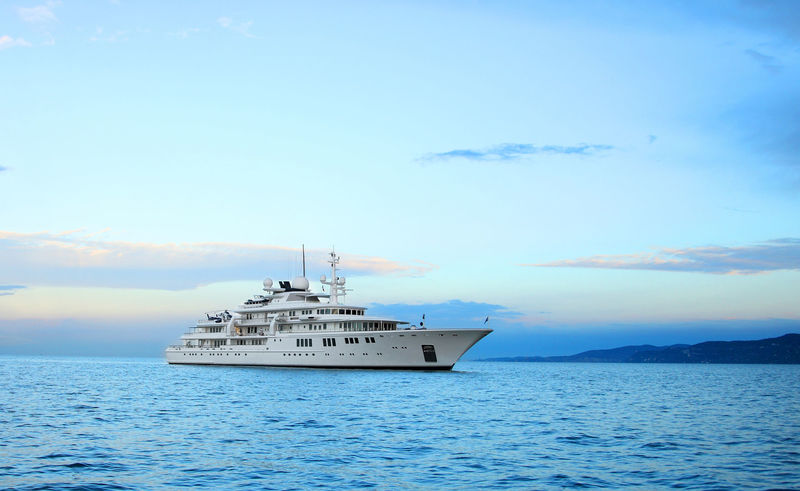 Certainly, not all clients are after the latest in technology and design, but Nobiskrug understands that they appeal to a certain niche of a very particular market and Kahl seems to be quite content with that. “Let me put it this way; over the past 10 years we have put a strong focus on doing something truly innovative and we have a team that is set up and ready to come up with good ideas, ready to test new things and take the risk of creating something completely different. The league in which we are playing is much more set upon the early developmental stages of a project and this is also the type of owners who we have been dealing with until now. It is something we deeply appreciate.”

Was innovation something Nobiskrug focused on from the beginning?

As it turned out, yes. Let’s go back to the year 2000 when we launched Tatoosh, which, for me, is still one of the trendsetting big yachts in the 90-metre plus range; she is a classic. Tatoosh was a huge vessel and at the time she was considered innovative as it was part of the beginning of building bigger yachts and I am so happy that Nobiskrug was part of that from the very start. She is still very well known today some 17 years later and is seen cruising all over the world.

What are the innovations that you find yourself focusing on today?

A big part of that for us is to cope with the increasingly stringent regulations under which these vessels have to be built today. I see it as an innovation in itself to be able to define the requests of an owner and to deliver something that is purely something for him or her within these confines. Not only have that but to do so in a way that is technically efficient and will help reduce the costs of operating a yacht. Whether it’s a sophisticated air conditioning system that is able to operate in temperatures far below zero or in some the most humid climates in the world without constantly being on the technical edge of the yacht’s systems, all the while adhering to these regulations.

Do regulations sometimes get in the way of new inventions?

Most of the regulations are devised and implemented to safeguard the people on board and I think we should do everything possible to make that a crucial part of every project. I have a great understanding of the regulations surrounding yacht building and I don’t think it’s entirely accurate to say that these principles are narrowing the scope of freedom we and owners have. It does makes it a little bit more challenging to fulfil all of the wishes as, for example, compartments on board can sometimes not be as big as is wished by the owner, but we handle that in dialogue with the owner as well as the flag state to come as close as possible while complying with all the rules. This topic is sometimes seen as a black cloud in the sky of yachting which I think is not correct. 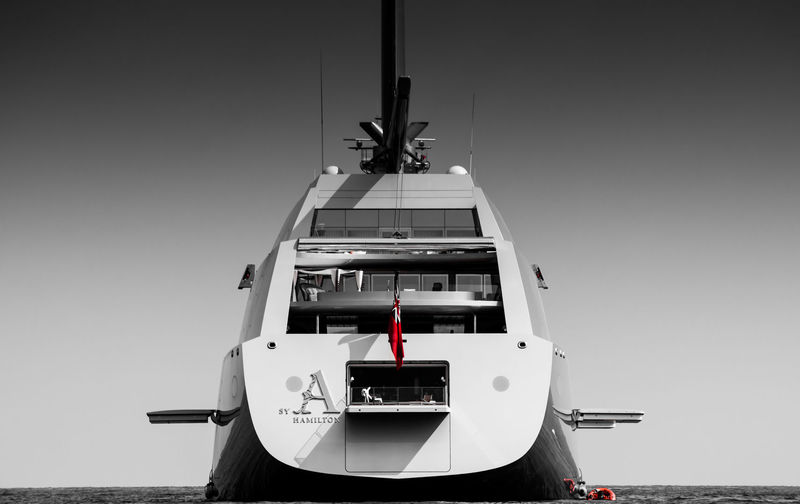 Why do you think Nobiskrug was selected as the builder of Sailing Yacht A?

We met the owner’s team some years ago and we knew them from another build project. The number of shipyards who are capable to do the concept design, development and actual construction of such a project, from an engineering point of view, is very limited. The facility was another big discussion as we had to combine the engineering package with the facility set up for such a huge project. There are not many that are able to deliver this and do it at the standard and finish as was required. We are very proud to have done it and it was a fantastic project. I’m sure that the whole industry will still talk about this ship in 50 years and maybe even in 100 years from now.

What role has innovation to play to ensure we are still able to go yachting in 100 years’ time?

We have to focus more and more on protecting the environment. Whether it’s the water, the air or the ocean bottom. That means we have to develop technical precautions to clear all risks and not do harm to the maritime environment in which the yacht is cruising. We also need quiet and efficient systems that will do without the need for an anchor that can potentially damage fragile coral beds, and allow the vessel to stay in place on its own and do so efficiently. 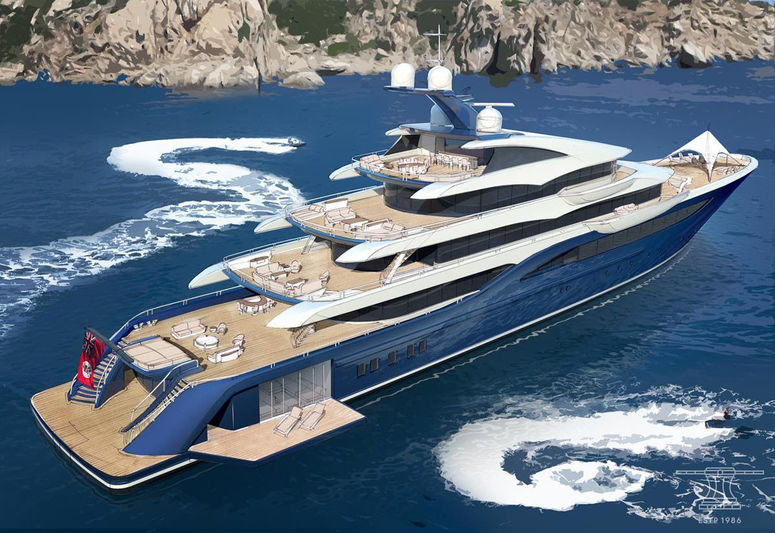 Alternative systems for propulsion are also in our focus. We are in permanent discussions with the engine makers to improve exhaust systems while investigating different sources such as fuel cells and other technical means for propulsion. They do exist and we are familiar with alternatives also through our military shipbuilding division, but it will be a few years before these systems, as well as the creation and manufacturing of these systems, become as eco-friendly as we’d like. Reducing our carbon footprint is a big and very important task but we feel with our engineering and project development teams, we are in a good position to contribute to that conversation.

Do you think this is an issue that is hindering some potential clients to become owners?

I think we must, for sure, open our industry more. We have to give a deeper insight into what we are doing and with which processes we are working. Especially for those individuals who are not yet decided, those who are new to yachting and who have the desire to create a custom yacht according to their beliefs and taste. We have to give much more transparency and to open ourselves up for this access to make it possible for the owners themselves to make their enquiries, to make their own studies and to understand who is offering what and how they can approach the process. The whole industry has a lot to learn about this and we have to incorporate the media wherever possible to make this easier for potential clients.

Is the market in a good state at the moment? 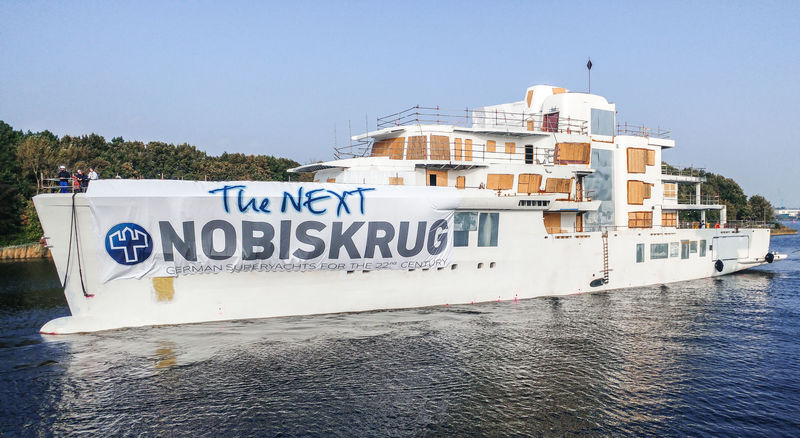 We are very happy so far and we are seeing a good market development at the moment. My feeling is that the market has come back with a certain strength which I have not seen within the last 15 years which means the projects we are working on are very interesting. There is a lot of individualism with some contemporary project but also some traditional things in between.