The vessel transited to the lift on Sunday April 13th and was launched today at approx. 1200hrs from Burgess Marine’s 1000T Rolls Royce syncrolift ship lift and has preceded under tow to the Port of Southampton for final fit out, commissioning and sea trials. The tow has been facilitated by Williams Shipping. Burgess Marine is one of over 200 local subcontractors to have supported Shemara Refit LLP.

Burgess Marine provided specialist support and personnel to Shemara Refit LLP for structural and fabrication works, mechanical works and pipefitting. Mr. Peter Morton, the Owner of Shemara Refit LLP comments: “Burgess Marine has been an important partner in this project from the moment we took ownership of the vessel in Lowestoft in 2010”.

Burgess Marine’s Portchester facility has seen major investment since the company acquired Testbank Ship Repair in January 2013; the channel and syncrolift ‘pit’ have been extensively dredged by Jenkins Marine allowing vessels up to a maximum draft of 4.5m to utilise the ship lift. In line with further major investment in Trafalgar Wharf the wires, bearings and winches have all been overhauled and the sites infrastructure has been significantly improved. 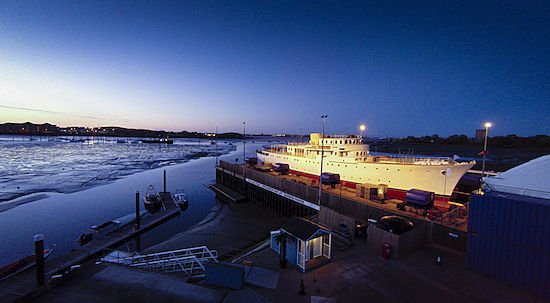 Burgess Marine’s General Manager in Portchester, Mr. Karl Kerry, comments: “the investment in the site has been well thought through and is substantial - we’ve spent over £250k on the footprint to both allow increased draft vessels up on to the ship lift and to better support our regular customers”.

Mr. Nicholas Warren, Burgess Marine’s Managing Director goes on to say: “the facility at Trafalgar Wharf is of obvious longer-term strategic significance to us - the increased draft now allows us to seek new customers and better support existing clients. BAE Systems, Serco, the MoD, Wightlink and the Gosport Ferry will benefit from our investment as too will numerous other local and national operators. Portchester, and the South Coast, needs more ship repair custom and I genuinely do hope that this major investment will help, as will the positive publicity surrounding today’s successful launch of MY Shemara and the continuing major refit works onboard the 57m MY Tacanuya”.