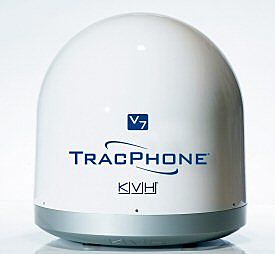 Introduced to the UK market at the 2007 Southampton Boat Show, the revolutionary TracPhone V7 from KVH, is a marine communication system which brings together the same high quality broadband connection available on-shore to smaller vessels.

Users will enjoy seamless roaming in European, North Atlantic and USA/ Caribbean cruising grounds within a wide footprint, as well as some west coast and South American coastal areas.

The small 60cm (24”) KVH antenna is a fraction of the size of the standard one metre VSAT system and therefore provides the ability to position the unit in limited space. In addition, the antenna is a stunning 75% lighter than standard antennas, ideal for mounting on yachts where weight is critical.

Data speeds of 512 Kbps uploading and 2 Mbps for downloads are equivalent to having a cable modem at sea. Considerable effort has been made to ensure the system has manageable running costs for smaller vessels with a flexible cost structure offering always-on fixed rate or pay for what is used. The size and weight of the antenna makes the TracPhone V7 simple to install with standard equipment and as the unit has automatic, stabilized, GPS-enabled skew control that adjusts to the boat’s movement, it does not need to be connected to the boats gyro compass.

The KVH TracPhone V7 is a powerful and robust system that provides rock-steady connections and withstands the harshest conditions at sea.