The Cairns Marlin Marina has expanded by 20 percent with the completion of the new G Finger and Sailfish Quay pontoon berths adding a further 44 berths to the world-class marina. The new state-of-the-art G Finger wharf, built at a cost of almost $2 million, is the first project completed under an accelerated $23 million of capital works program being undertaken by Ports North. 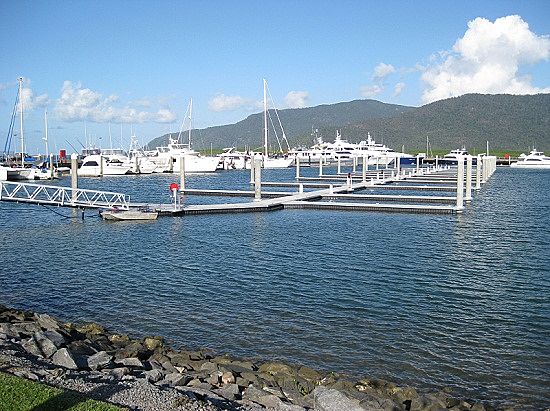 Ports North announced late last year it would bring forward more than $20 million of capital works for the Port of Cairns in a bid to boost jobs and facilities for one of the city’s most vital transport and tourism hubs. Its completion will bring the total number of berths at Australia’s premier marina to 261 including 12 superyacht berths, significantly adding to the city’s tourism infrastructure.

Ports North Chairman, Dr Ken Chapman said the new infrastructure injection was a critical part of Ports North’s drive to support jobs, investment and economic development in Cairns and region. “It’s fitting that exactly 12 months ago we welcomed the first cruise ship to the new Cairns Cruise Liner Terminal and today we officially open another new facility for the Port of Cairns,” Dr Chapman said. “The completion of this project coupled with the commencement of the major redevelopment of the foreshore is a clear demonstration of our confidence in the future of the Port, the tourism industry and the city".

"These projects are part of the largest investment in Cairns tourism infrastructure in many years. We are committed to providing world‐class marine facilities to enhance port operations and the long‐term viability of the port. The new marina berths are a magnificent addition to the Marlin Marina and will boost Cairns’ reputation as the pre‐eminent gateway to the Great Barrier Reef and premier superyacht destination,” Dr Chapman said.

The marina works were undertaken by Pacific Pontoon and Pier and completed one month ahead of schedule.