Camper & Nicholsons Marinas (C&N) has reached an agreement with First Eastern Investment Group (First Eastern), a pioneer of direct investments in China, that sees the formation of a Joint Venture to develop the marina sector in China and Asia. First Eastern will also be investing £4.2 million in C&N through the purchase of new shares. 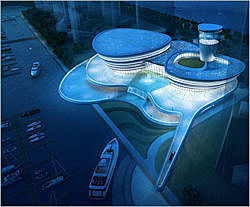 C&N has recently designed four marinas in China, and is working on several other projects which include long term management agreements, in what has become the world’s largest growth market for marina development and operation.

This continues the successful expansion of C&N Marinas’ business worldwide, following their recent appointment to manage Yas Marina in Abu Dhabi, home of the Abu Dhabi Formula 1™ Grand Prix, and the announcement of a partnership with BR Marinas - Brazil’s leading marina operator - to develop new marinas in Brazil. C&N already operates its own marinas in Malta, Turkey and Grenada.

The Joint Venture will be called Camper & Nicholsons First Eastern, and it will shortly open its Hong Kong office with Mandarin-speaking staff, to give China-based clients a high level of service. Representative offices will also be established through First Eastern’s network, in Beijing and Shanghai.

First Eastern has a wide network of connections and more than 20 years of experience in China, having invested in over 100 projects to date. Together, the two companies aim to give clients owning or developing marinas in China and Asia the best combination of sector and country expertise.

To facilitate this development C&N has appointed James Beaver as its Chief Operating Officer. Nick Maris, CEO of C&N Marinas, will also be CEO of the Joint Venture, which will be chaired by Victor Chu, Chairman of First Eastern.

This is an important step forward in realizing C&N’s objective of becoming the premium global marina network for the benefit of its customers, clients, partners and shareholders.

Victor Chu, Chairman of First Eastern, commented: “We are delighted to launch our Joint Venture with Camper & Nicholsons in China. C&N is the leader in premium marinas and related real estate around the globe. There is huge demand in China for their outstanding expertise and quality, and we are delighted to be their partners to tap into this fast growing market.”

Nick Maris CEO of C&N said, “Our objective is to give yachtsmen, wherever they are in the world, the same high standards of service, with a local flavour, that they have come to expect from Camper & Nicholsons. Our Joint Venture with First Eastern will lead to some truly outstanding C&N-operated marinas in China and elsewhere in Asia.”