Cantiere delle Marche (CDM) announced their third launch of 2015 yesterday with the Darwin Class explorer superyacht, Acala. Measuring 31.09 metres, she has been constructed in steel and aluminium and will be officially presented to the industry at the upcoming Fort Lauderdale International Boat Show. 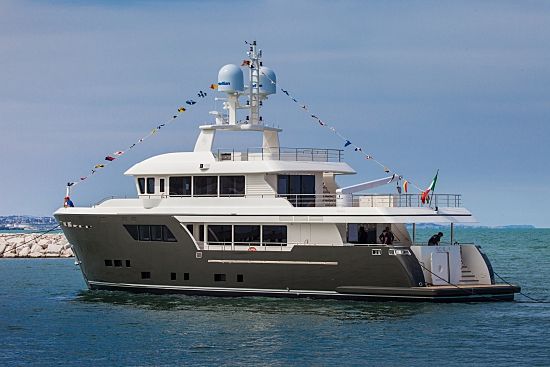 She features naval architecture and exterior design by Hydro Tec, and accommodates guests over a five cabin layout. Amongst her specific customisations for her Central American client is a lazarette equipped with a nitrox compressor for diving, as well as the doors in the large salon that are able to open completely.

Ennio Cecchini, CDM founder with Vasco Buonpensiere, stresses the importance of Acala for the future of the CDM. He says, 'We come back to Fort Lauderdale after three years with an explorer yacht that is extraordinary under every point of view. In the shipyard we say that this is the smallest ever built 60 metres. We say this because of the many solutions that are not normally found on yachts of this size. Just look at the garage: its components and the organisation of space and stowage are enough to understand it. This boat will be an incredible success for the overseas markets, and the number of appointments already set for the most important American Fair is a strong sign!'

The Fort Lauderdale International Boat Show will be held in Florida from 5th to 9th November.