Cantiere Navale Italia, a new Italian yacht builder, has just unveiled their new 13 metre aluminum tender, designed by Luca Dini, who has used the vessel's hull shape as an active part of the boat's styling. 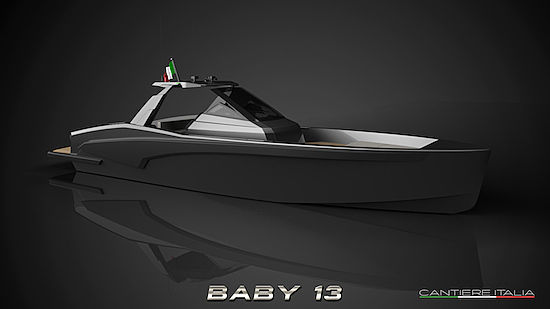 The designer has described the yacht as "a fighter plane without wings, a sporty boat that has perfect proportions, that really looks like a fighter, powerful and efficient thanks to state-of-the-art technology.”

The vessel features a planing V shaped hull, with a variable geometry 16.8° dead-rise at the stern. Cantiere Navale Italia has paid extra attention to hull entry shape and chine proportions and positioning to obtain a fast yet comfortable hull form.

On deck, tables and settees are located forward, with a spacious walk-around sun bathing area aft, along with a useful and attractive hard top. Inside, she offers a dayhead, with separate shower, galley and a double cabin.

Propulsion will come from two Yanmar 370hp diesel stern drives, giving her a maximum speed of 43 to 45 knots.

Cantiere Navale Italia has already begun construction of the first 13 metre hull, for a spring 2015 launch. The yard will also launch a 57' model, as part of a series that will range from 43' to 90'.