Nena, the first Cantieri di Pisa superyacht ever to feature a metallized grey hull, was launched in Pisa on Saturday 21st February. Built entirely of fibreglass, Nena is 36 metres long and almost 7.5 metres wide. Her dynamic, sleek lines reflect the great Akhir tradition, and are accentuated by two short strip openings above and below the dark hull-length band, allowing the creation of nine windows for the owner’s suite. 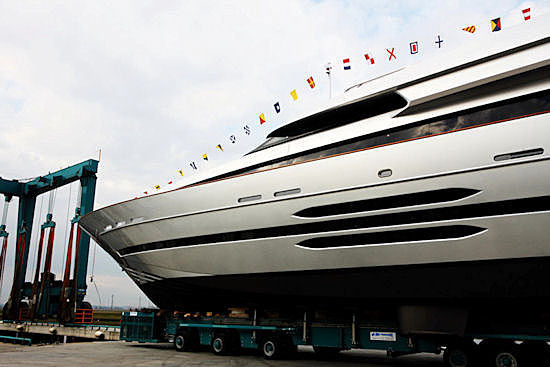 Her interior styling, by Cantieri di Pisa’s own interior designers, is clean yet traditional. The decorative concept is based on the elegance of sanded teak with a wax effect, included in a modern scheme of boiserie that has been given a new interpretation. Here precious fabrics on the wall panels create a warm and hospitable environment, which is blended with a rigorous aesthetic.

The furniture is mostly in black pear wood, with large sections upholstered in leather. All the pieces are expertly made using 17th-century techniques by the yard’s team of skilled craftsmen.

Special attention has been paid to on-board lighting – natural daylight filters through sliding fabric panels, a feature used throughout the yacht in place of more classic curtains. Indirect artificial light is provided by cove lighting, accompanied by direct light points in the shape of designer lamps forming part of the overall furnishing plan. 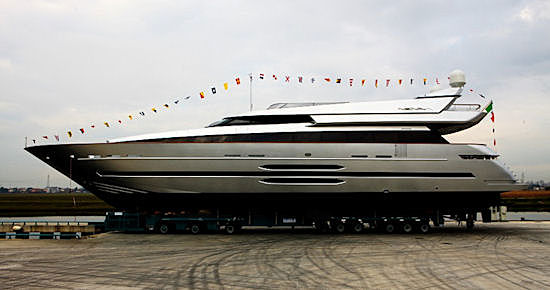 The interior layout also reflects the yard’s skills and creativity. The lower deck configuration includes the owner’s suite, a twin guest cabin and two matching VIP suites. The main deck is dominated by the salon - this is split into two sections, an area for socialising and a TV lounge. Two symmetrical corridors lead to stairs accessing the bridge and full-beam dining room. Further forward is the crew galley with dinette and a stairway down to the three crew cabins.

On the flying bridge, behind the two piloting seats lie a pair of large sunpads, a spacious open area and a kitchen unit aft with a huge C-shaped divan and two large tables that can be joined together. In the cockpit a table, divan and four chairs - together with a divan and large sunpad forward - complete the range of furnishings. 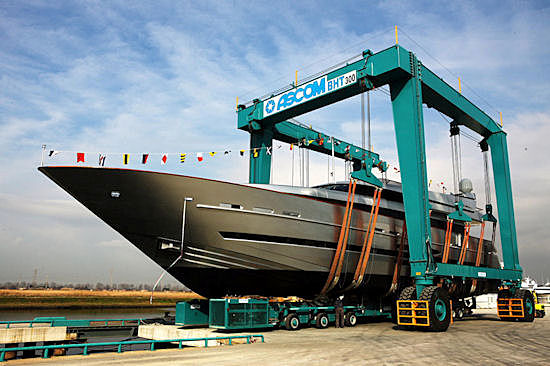 Nena is the third superyacht in the new Akhir range that Cantieri di Pisa have launched in the space of less than nine months. Last June Lazy Me, an Akhir 135’, became the first yacht to leave the slips. She is the first of the new models designed by the architect Carlo Galeazzi, who was given the task of renewing the entire Akhir line. Her debut was followed in September by the launch of the **** .