This article was written by Bill Springer, journalist for Forbes and life long superyacht enthusiast. In his own words, "When I’m not running, riding, rowing or sailing long distances, I write about superyachts and luxury travel."

When it comes to making a positive impact, few have worked harder, overcome more, provided more hurricane relief money, materials, and manpower, or frankly, cared more deeply for the islands and the people of the Bahamas than Carl and Gigi Allen. But their commitment to making a positive impact for the people of the Bahamas is not usually the first thing that comes to mind. This is simply because their large fleet of yachts including: a 164-foot-long Westport, and a 180-foot-long Damen Support Vessel that carries his Triton submarine, Icon seaplane, and several flats fishing boats is pretty distracting. The Allen fleet also includes a 68-foot-long Viking sportfishing boat and a well-used 39-foot-long SeaVee center console as well. 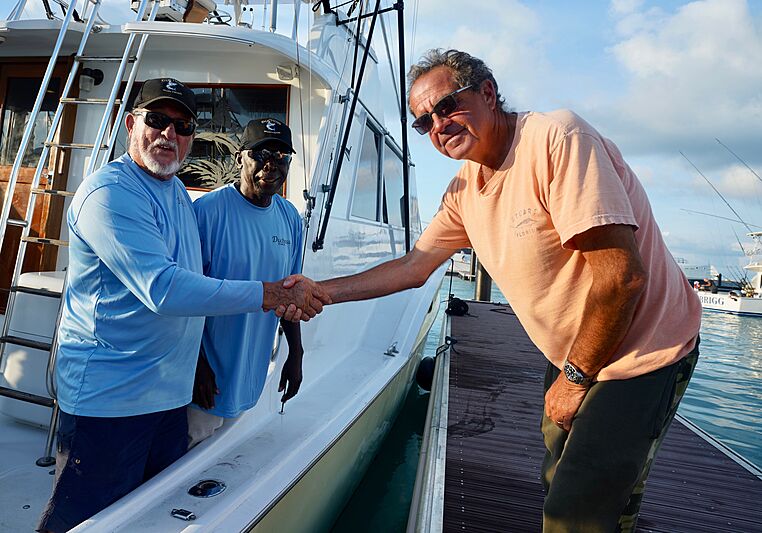 Photo: Walker's CayAnd, oh yeah, they also own a small island in the Bahamas—Walker’s Cay in the Northern Abacos about 90 miles east of Stewart, Florida—that has a legendary reputation for world-class fishing but was destroyed by a hurricane and has been abandoned since 2004. 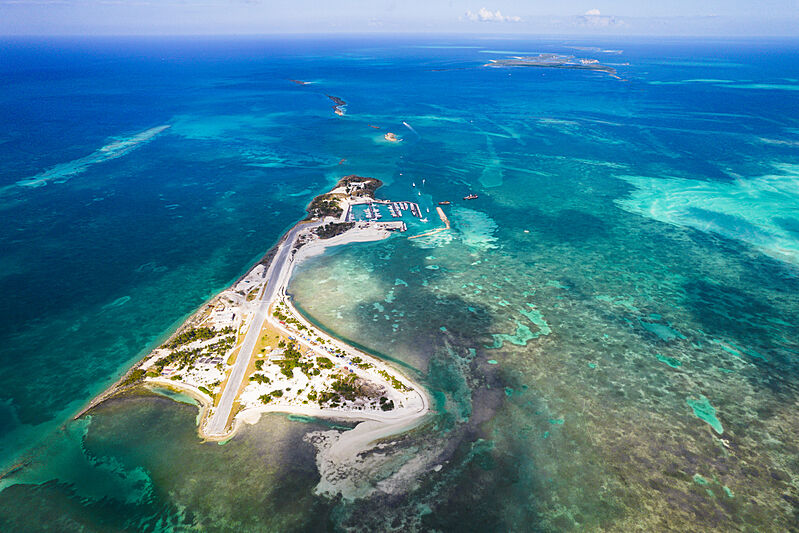 Photo: Walker's Cay“I’ve been going to Walker’s since I was a kid. And I’m still amazed that I ended up being the guy that’s bringing it back to life,” he says with a wonderfully mischievous and understated smile. “I knew bringing Walker’s back was going to be great for fishing. The photo that hung over my desk that showed the channel filled with boats coming back into the marina after a fishing tournament in the 1990’s always inspired me to buy the island if I ever could. But after the devastation of Hurricane Dorian and then Covid19, our commitment to rebuild—and help the locals by using 100% local labor—became even more important.” 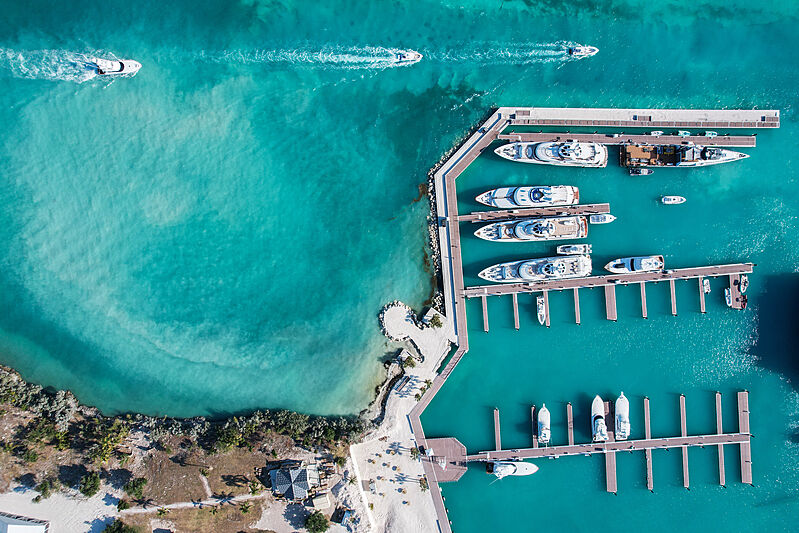 Photo: Walker's CayThe good news is that the determination and hard work of the Allens and their team is paying off. Rebuilding Walker’s has already created hundreds of new jobs for the locals that need them the most. Now the new state-of-the-art marina was just completed by Bahamas-based marine construction company EMM. Big yachts, and big names celebrated the first phase of the Walker’s Cay rebirth this weekend, by competing in The Walker’s Cay Blue Marlin Invitational Fishing Tournament. It was the first fishing tournament held there in over 15 years. 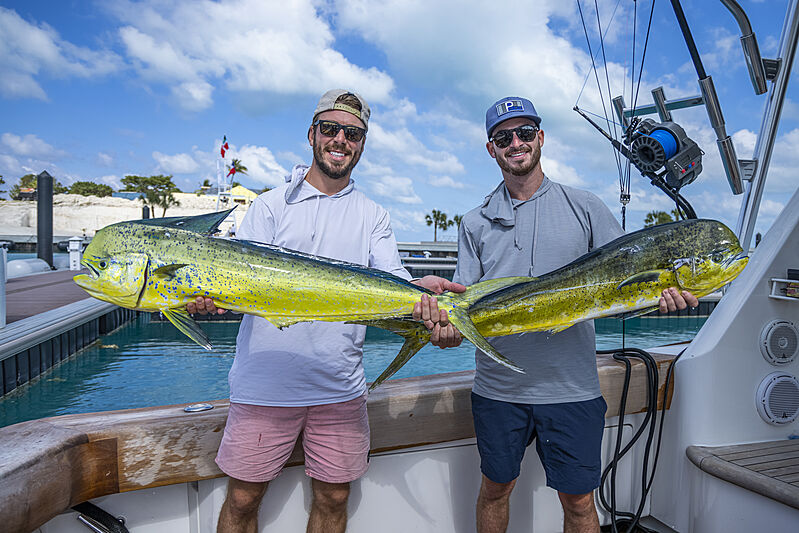 Photo: Walker's Cay“I’m so proud of our team who worked so hard to get the marina ready for this tournament,” Allen said at the captain’s dinner held the night before the tournament began. “And honestly, we weren’t sure we were going to make it in time. But, seeing the marina full of boats like it used to be, and seeing the smiles on the faces of people who love Walker’s as much as I do is incredibly special. I feel like the luckiest guy in the world.” 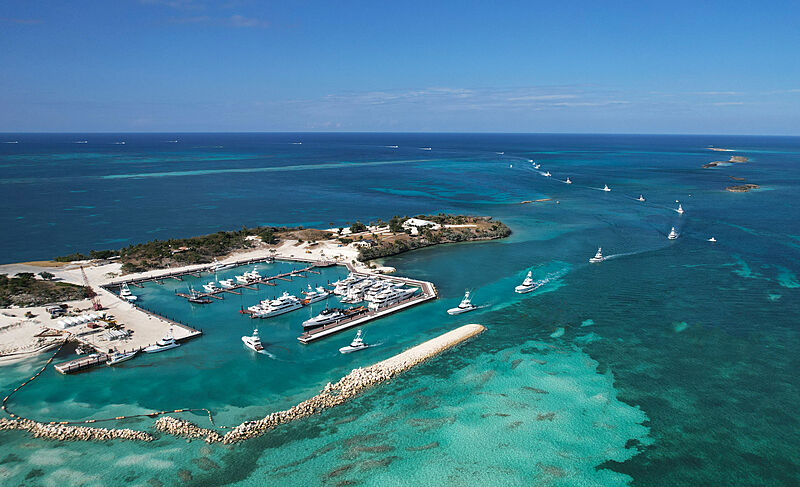 Photo: Walker's CayAllen wasn’t the only one who got a bit emotional. Legendary Walker’s Cay fishing captain Billy Black and his soon-to-be-wife Karen were overjoyed to be back. So were all the other captains and crews that were able to score a coveted invitation to what was one of the most exclusive fishing tournaments of the year. 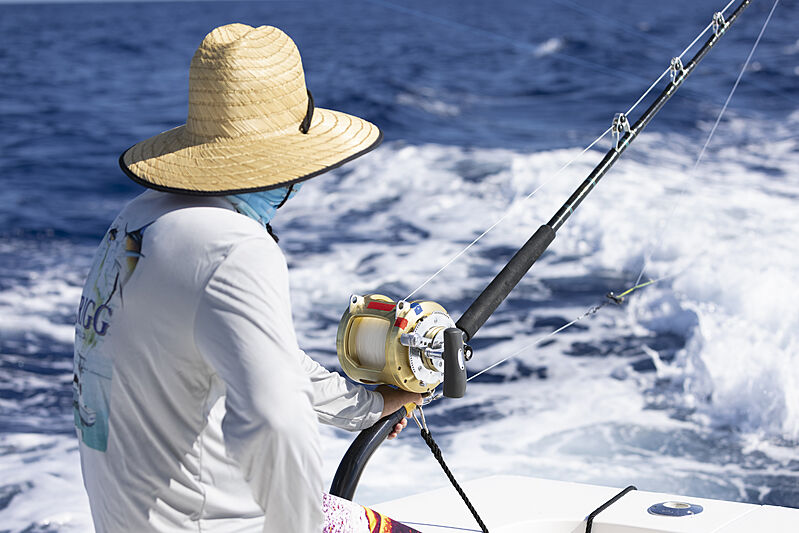 Photo: Walker's CayThe Walker’s Cay Blue Marlin Invitational also attracted big names like #1 ranked golfer in the world Dustin Johnson, who not only competed aboard his custom-built Just Chillin. He and his team ended up on the podium after three action-packed days where 26 Blue Marlin were caught and nearly all were released.

But no team had a better tournament than Captain Russell Sinclair’s Bayliss 77 Wave Paver. They won Top Overall Team and Top Captain and Crew honours. Best of all, boat owner JR Davis not only claimed Best Angler honours, he also brought in the biggest fish of the tournament—a 508-pound Blue Marlin—that was caught on the first day and christened the new and improved Walker’s Cay gantry in style. 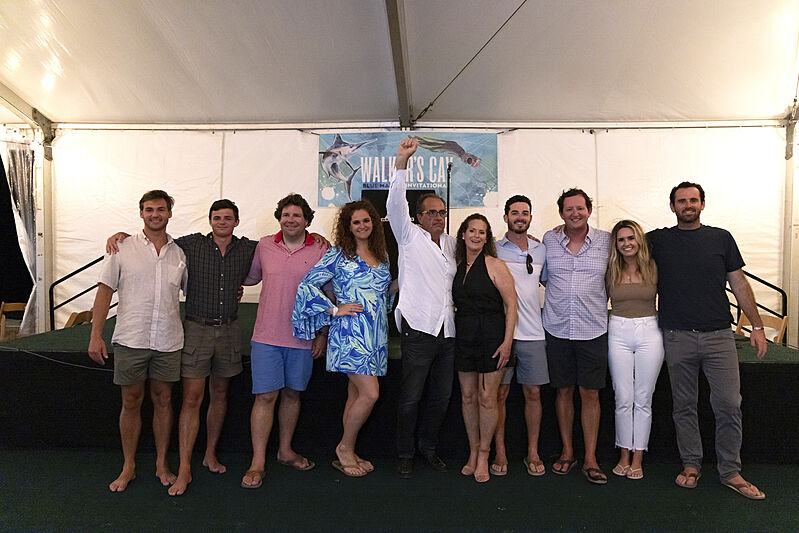 Photo: Walker's CayAnd now that the new marina has been enlarged and strengthened to accommodate  superyachts, Johnson, Allen, and others competed on their fishing boats during the day, then retired to comfort and service of their much larger yachts in the marina at night. Allen’s Westport 164 Gigi was his home base as it has been since he and his wife — Gigi — have been rebuilding the island, and the 150-foot-long Trinity Bouchon was tied up right alongside Gigi in the marina. 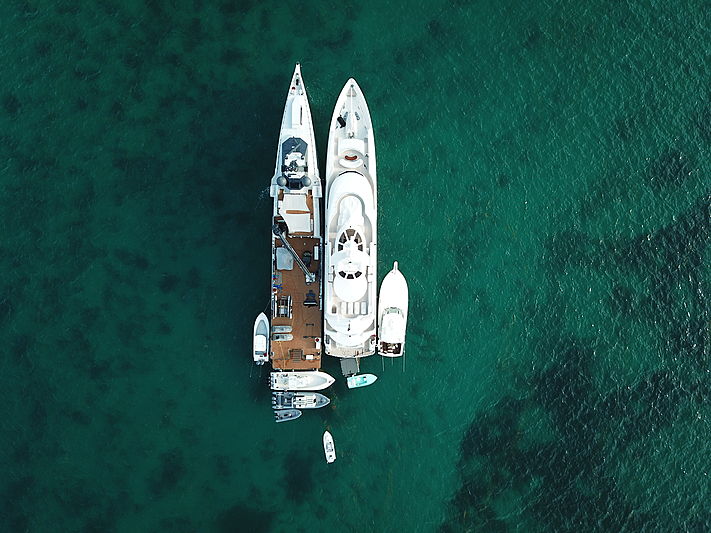 Photo: Allen ExplorationCoincidentally, Walker’s attracted several other Westport’s including the Westport 164 Honey and the Westport 130 Top Dog as well as Westport 164 My Girl owned by the Chouest family. But I’m not surprised to see so many Westports in one place. Dino Chouest is an avid fisherman whose family also owns Westport Yachts. 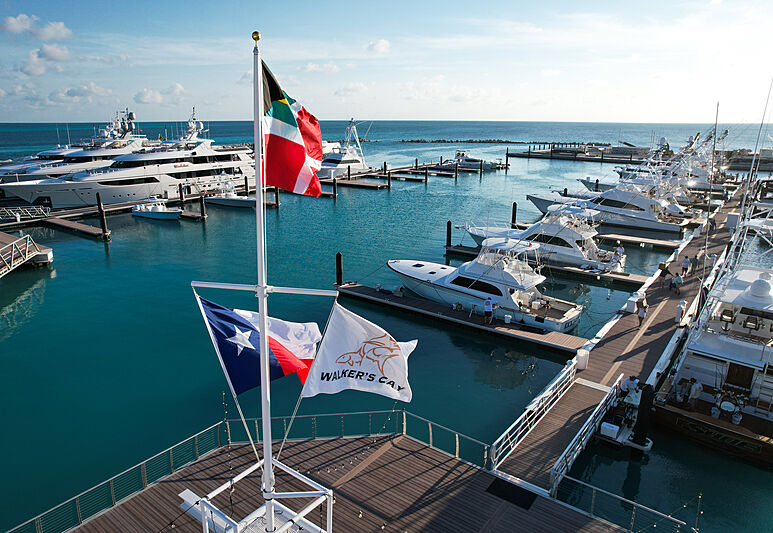 Photo: Walker's CayThen, after three days of great fishing, amazing parties, old friends sharing stories and faded photographs of growing up on Walker’s, and a whole new generation getting to experience the special magic of the Bahamas on the new and improved Walker’s Cay, it was over. 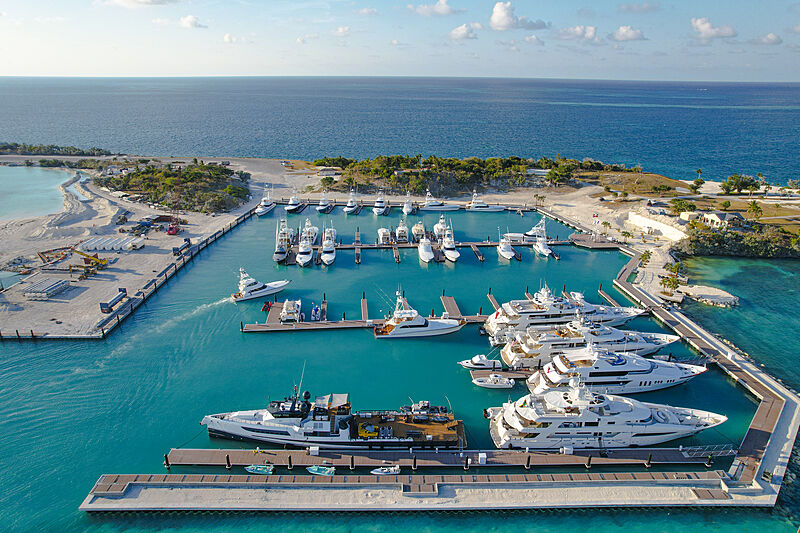 Photo: Walker's CayBut as each boat slowly motored out of the Marina, the highly energetic Allen was there to wish everyone a safe journey back home, and to invite everyone back to Walker’s again soon. Because opening the marina is only the beginning. Allen and his team have big plans to make the marina better than ever. And they’re working to add state-of-the-art accommodations including a pool and spa and even some bungalows at the opposite end of the island that will not only attract fishermen, but anyone who wants to escape to the special beauty of this special place. 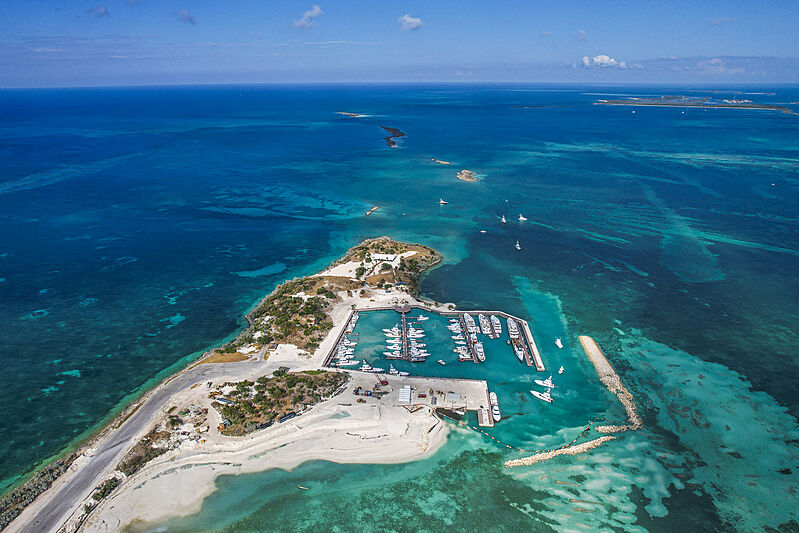