It is with great pride and enthusiasm that the Ocean Independence Managing Partners Peter Hürzeler and Nicholas Dean announce today the successful acquisition by Ocean Independence of long-standing industry associate, Cavendish White. 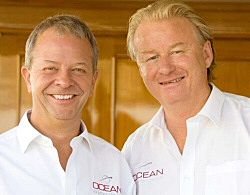 The friendly amalgamation of Cavendish White and Ocean Independence results in the formation of one of the industry’s largest brokerage companies, managing an impressive Central Agency list of yachts for sale and the second-largest fleet of crewed luxury charter yachts worldwide.

Cavendish White’s former owner and Managing Director Michael White will continue to take a very active part in the company. He and his predominantly British team are set to join forces with the rapidly expanding Ocean Independence crew in the UK, while the US offices will merge to become an even stronger force in the American market. The company’s headquarters will continue to be in Zürich, while the addition of CW’s offices in Athens and Dubai increases Ocean Inedependence’s worldwide locations from 10 to 12, with a host of experienced brokers operating in a multitude of languages and cultures.

Sharing core values and visions for the future, the synergy of this merger allows the continued provision to all clients of the same high quality international service and advice, while illustrating the Ocean Independence promise of providing “Global vision. Local insight.”