A new 40-metre displacement superyacht has been sold by Cantiere delle Marche (CdM) in conjunction with Camper & Nicholsons to be known as project MG 129 during its build at the Italian shipyard. 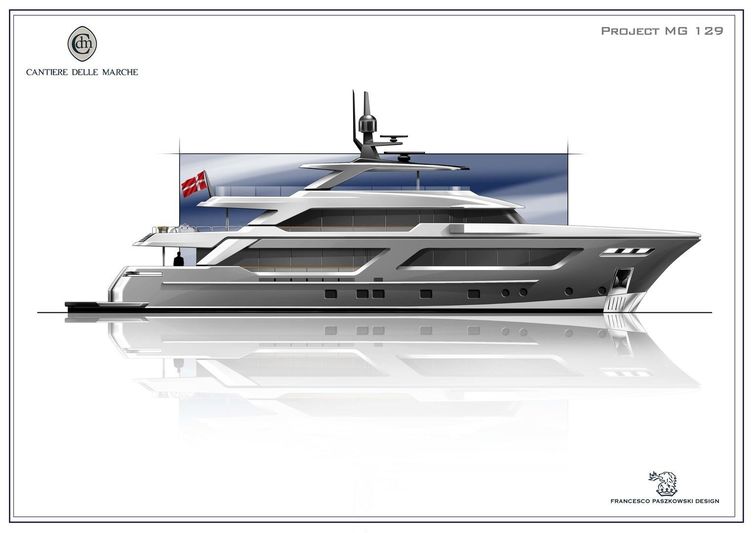 CdM has worked with Francesco Paszkowksi on the exterior and interior design of MG 129 while Hydro Tec was once again brought in for their naval architecture experience. To be built from steel and aluminium, the full displacement vessel was commissioned by a North European owner.

“It is a great pleasure to work with an owner who was keen to bring his experience to CdM,” says Vasco Buonpensiere, co-founder and Sales and Marketing Director at Cantiere delle Marche. “By deciding to have his new yacht built by CdM he offered a serious statement of trust in our yard's reliability and construction quality.”

Little is known about the project’s exact features, but in true CdM fashion, MG 129 will be equipped to explore the globe without restrictions on her own bottom. The yacht comes with an impressive cruising range of 5,55 nm while cruising at 9 knots and will be able to reach a top speed of 14.5 knots.

Fabio Ermetto, Chief Commercial Officer of Camper & Nicholsons says: “It has been a great experience to represent an experienced yacht owner with a clear vision of his next yacht and at the same time having the CdM team with a very professional and client-oriented approach, always able to translate such a vision.”