The Cerri 102’ Flyingsport is the new flagship of the Cerri range and is distinguished by its soft lines and personal design, representing a revolutionary solution that unites the comfort of a fly bridge with the speed and sportiness of a big open. 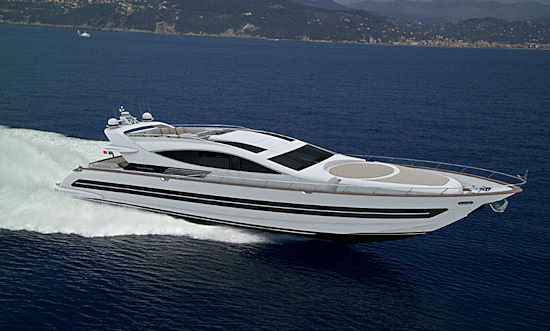 Entering the yacht from the aft deck, there is a day toilet on port side and to starboard a spiral staircase leads to the galley and captain’s cabin. The aft area is dominated by a large living room with a big C-sofa and a central table on portside.

The space on starboard is fully flexible and can be made to the owner’s wishes. Forward on the main deck is the dining area which seats 10 people and the wheelhouse which offers excellent visibility thanks to the typical large windows found on Cerri yachts. 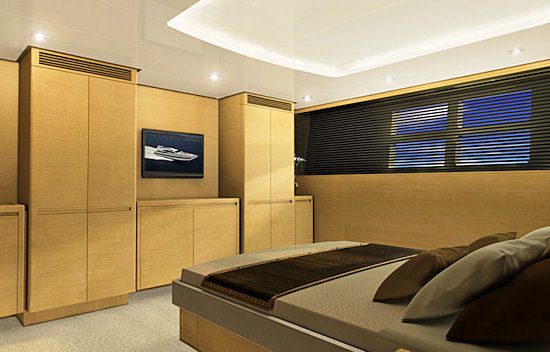 Amidships the main deck spiral staircase leads to a small lounge with a library and sofa on the lower deck. From the lounge there is access to the aft master bedroom with en-suite bathroom. Moving forward there is one double cabin, two twin cabins and the corridor ends at the full beam VIP cabin. 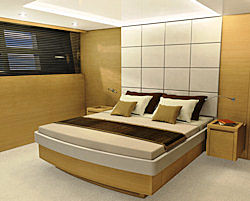 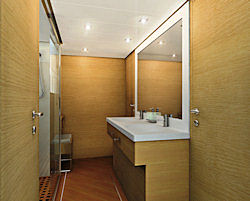 On the fly bridge, which is accessed via a staircase in the main hall, there is a second steering position which is completely retractable. The multifunctional driving seat unit can also be transformed into a large sun deck area. While there is a bar area on the aft, the centre of the fly bridge deck is fully customizable to the owner’s wishes. 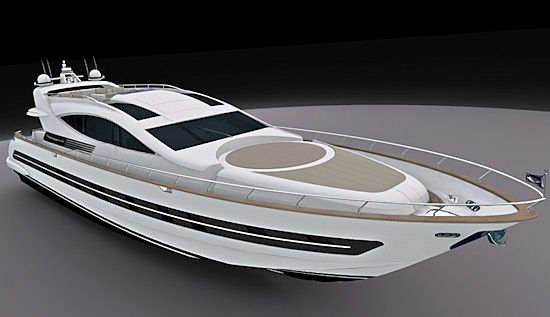 Other outside relaxation areas include the main aft deck with a large sundeck and a dinette with multifunction table. One of the most innovative features of the Cerri 102’ Flyingsport is the area on the bow. A huge circular settee, that can comfortably accommodate up to 20 people, has a carbon fibre cover, which when opened protects from the sun and contains lights and the entertainment system, but when closed can be turned into another sundeck. 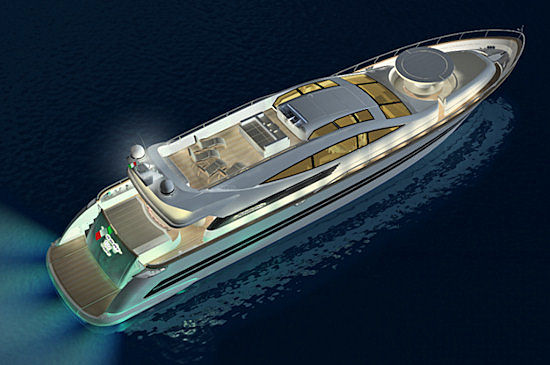 The garage is aft and the swimming platform lifts up to launch the 4.30 metre tender, waterscooter and other watertoys. The engine room houses the twin 2,400hp MTU engines, which are coupled to twin Arneson surface drives for a maximum speed of 40 knots and a cruise speed of 30 knots. 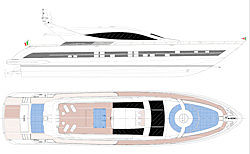 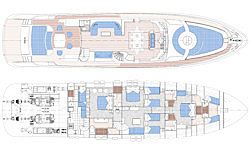 The Cerri 102’Flyingsport is being built in the new modern shipyard in Marina di Carrara. The launch of the first yacht, which is already sold, is imminent, while a second vessel is currently under construction.

On board the new Cerri 102 Flying Sport