On a sunny November morning Cheoy Lee launched the first of the Marco Polo Series of motor yachts. It formed the second part of a two boat launching sequence. A 58 meter (190-feet) anchor handling tugboat was launched just days before. 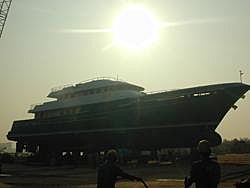 In the words of Ron Holland, the designer of the Marco Polo 45-meter motor yacht, she sits perfectly on her lines.

System installations are near complete. Basin trials have started, to be followed by seatrials. Furnitures are built separately in parallel. They shall be placed on board as system testing is completed, to allow seatrials at different loadings to take place.

As building slots open up, plate cutting for Hull 2 shall start, to be followed closely by Hull 3.