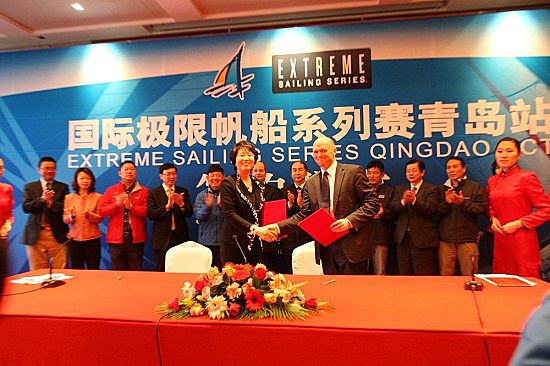 Qingdao played host to Act 2 last year for the first time, declaring the event an outstanding media and spectator driven event. In 2012, China’s fourth largest manufacturing port and the sailing venue for the 2008 Beijing Olympic Games, will again host Act 2 between the 17th to 20th April.

“The 2011 Extreme Sailing Series Qingdao for the Double Star Cup was successfully held at the Qingdao Olympic Sailing Center, adding new momentum to the development and popularization of sailing in Qingdao,” said Ms Zang Aimin. “Its success has greatly enhanced Qingdao’s reputation and influence as an international city. Approved by the Qingdao Municipal Government, we will sign a three-year agreement from 2012 to 2014 with Extreme Sailing Series. The event will be held every April in Qingdao. We sincerely look forward to the continuous cooperation with Extreme Sailing Series and a more wonderful Qingdao Act.”