Christensen Shipyard is pleased to announce that its latest yacht, the 160’ Primadonna, is near completion. Featuring an all composite, vacuum infused hull and superstructure, Primadonna is being built for a repeat customer, who, after traveling to some of the most remote corners of the World on his 145’ Christensen, has decided he, “wanted a little more space for his friends and family”. 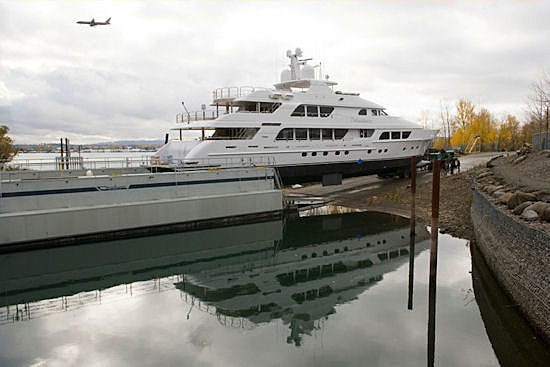 The interior was designed by Carol Williamson and Associates to a design brief which called for “casual elegance”. The yacht has 6 spacious cabins, including the Owners Cabin, VIP cabin, and 4 guest cabins which allow for up to 12 guests; interior woodwork has been done in a combination of semi and high-gloss Sapele mahogany, with custom stonework throughout by Jeff Homchick. The yacht’s exterior styling was done in-house by Christensen’s naval architects, and features smooth, classic lines which are puntuated by sloped pilothouse windows and a purposeful bow shear. Powered by twin MTU 12V 4000 series engines, she will cruise at a comfortable 12 knots, while topping out at 18 knots.

Primadonna is fully classified & certified to ABS (Maltese Cross) A1-AMS & MCA Unlimited Cruising and after final fit out and sea trials, will travel on her own bottom to debut at the Miami Yacht and Brokerage show in February 2009. Robert Emerson CSL’s Project Manager comments, even though there were some change orders requested by the client, because of the owner’s ability to make quick, final decisions when necessary, the project is right on schedule for a December 2008 delivery.