Christensen Shipyards has announced the signing of a contract for the first Custom 43M Series project. This sale to American buyers was brokered by Tom George of Tom George Yacht Group, making him the only broker to sell two new construction yachts at Christensen, the first being M/Y Mystic. 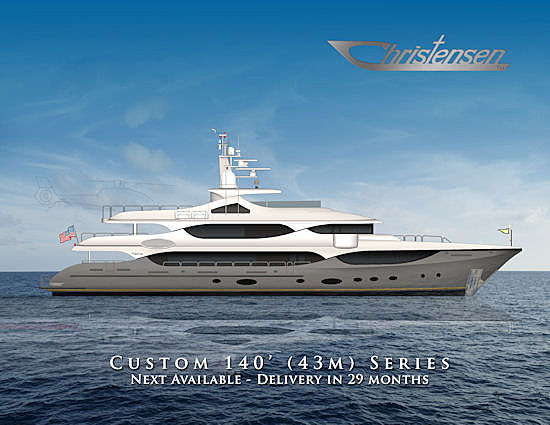 With a massive beam of over 29' and it's international tonnage of approximately 480 GRT, this luxury 142' vessel has a total interior square footage of 4,520. Twelve guests will be comfortably accommodated in five gracious staterooms each with an en suite bathroom adorned with custom finishes. It will feature a main deck Master Suite, two VIP staterooms, two forward convertible guest cabins, and an elevator servicing all decks.

The exterior square footage is 3,753, providing abundant opportunities for entertaining and basking in the sun along with ample room designated for a touch-and-go helipad and toys. The sun deck will include a full height bar, Jacuzzi tub, day head and lavish lounge areas. The bridge aft deck provides a large dining table for al fresco dining with drop-down air conditioning.

The yacht's exterior styling will reflect the classic Custom Series image with a raised forward full-shear bulwark and vertical pilothouse windows. It is powered by twin MTU 12V 4000 series engines, with a range of over 3,500 nautical miles, and features Quantum Zero Speed At-Anchor stabilizers.

In addition to the new 142' contract, Christensen has current contracts for two 164' Custom Series, one 160' Custom Series, and three Ocean Alexander 120's. The next 43M available is 29 months away and has an introductory price with a Patton Marine reviewed specification of $25,950,000 turn-key including a $50,000 fuel credit.