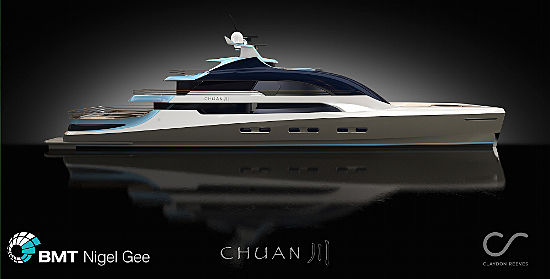 The design of the motor yacht is influenced by Asian architecture and traditions. The layout can be adjusted to function either as an impressive social space or a more intimate family based environment with a spacious full beam master cabin aft on the bridge deck.

Large sections of glass in the main deck floor allow occupants a unique view between the hulls, particularly when lit up at night. An articulated beach area and dive club unfolds at water level, bridging the space between the two hulls and creating an unprecedented width of over 15m.

James Claydon, Director of Claydon Reeves commented, “We returned to the catamaran platform for Chuan for the sheer volume it delivers. Throughout the yacht there are spaces of surprising size, be it the expansive foredeck or the huge open-plan galley and dining area.” 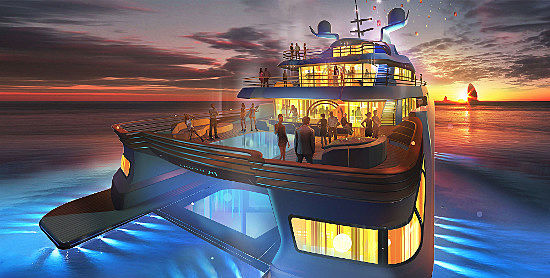 BMT’s XSS hull-form has now been fully proven in the demanding offshore energy industry where speed and sea-keeping ability are critical to operations. A second XSS is currently under construction in Holland with ever larger variants under design development at BMT’s Southampton based office.

James Roy, Yacht Design Director at BMT Nigel Gee concluded, “Owners, and indeed our wider industry, are quite traditional in the choice of hull-form. It would be nice to see a greater take-up of multihull platforms. Our XSS provides the best compromise between performance and sea-keeping ability for a high speed catamaran and Claydon Reeves have demonstrated with Project Chuan just how that volume can be put to use for dramatic effect.”

TClaydon Reeves will be displaying a model of Chuan at the upcoming Monaco Yacht Show on their stand - DG3 on the Quai Jarlan.