Though it has been almost 20 years since Clifford Denn and his associates put pen to paper when creating the design for the timeless superyacht Pencil on the Water, the vessel, with her sleek lines and classic aesthetic, has retained her appeal to this day. SuperYacht Times sat down with Denn to discuss the project, marking the design's official release to the public.

Photo: Clifford DennThe project was first introduced to Denn by Daniel Ponchau of Burgess, who had a client looking for a bespoke superyacht. Denn and his business partner at the time, Eric Jan, met with the owner who asked for, “a pencil on the water, wanting it to be long and sleek, that was our brief.”

Gradually the form of the design came into being, and at 160-metres in overall length, with a low discrete profile and 18-metres in the beam, it is clear that they took the design brief seriously. Had she been built, she would have at the time been the longest yacht in the world. Though many iterations of the superyacht were designed, with Denn also creating an optional ‘lower cost’ 100-metre version, the final design has long flowing lines and a sleek profile in the water. The designers incorporated the wheelhouse into the funnel base amidships, in order to reduce the visual height and accentuate the length by giving the appearance of only having two superstructure decks above the hull.

Photo: Clifford DennFrom the stern, the yacht has an overhang worthy of vessels from the golden age of yachting, harking back to lines barely seen since the early 20th century. For Denn, her low volume superstructure with simple clean lines will afford the captain and crew the luxury of ease of mooring, “She is a practical vessel with full length side decks on each deck allowing the crew to place fenders over the side at any point. They don’t have to worry about the increased complication and danger of how to access the exterior of full beam interior spaces using tracks and harnesses.” 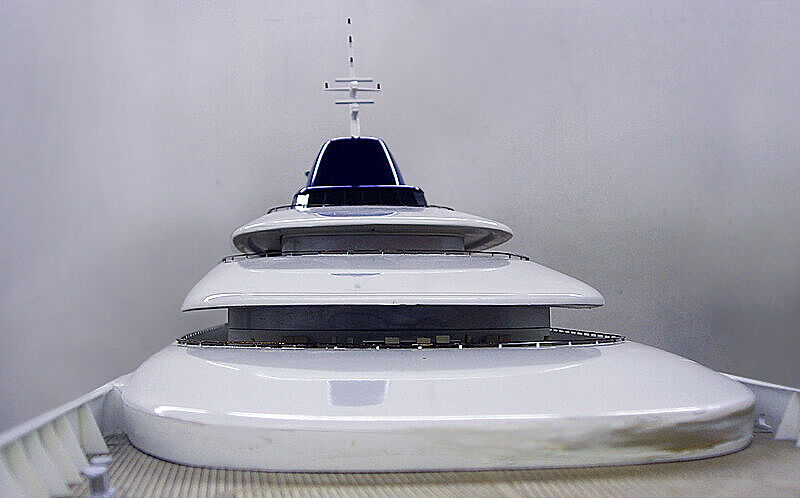 Photo: Clifford DennThe GA shows the expansive owner’s suite that has been planned for the forward section of the upper deck with its own office, lounge and saloon. There are an additional four guest cabins, and three spacious VIP cabins. At the highest point, incorporated within the funnel base, is the captain’s cabin and office, the ship’s office and the wheel house. 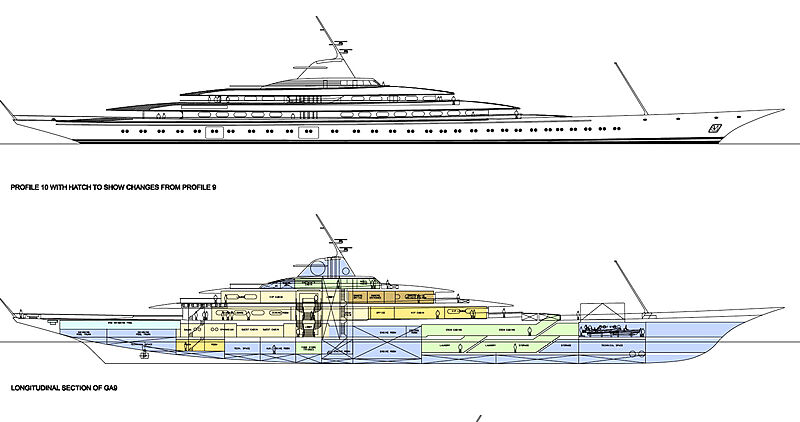 The yacht has a spacious foredeck with ample space for loungers and an entertainment area amidships. A discrete central crane hoists the various tenders and toys from the below deck storage in the bow. From the interior saloon looking forward, guests have an almost uninterrupted 240-degree view of the ocean around them.

Sadly, though the owner took the vessel right through to the specification phase, with Amels in the Netherlands offering a very competitive price for her construction, the yacht was never commissioned. Today, Denn feels that there is a real gap in the market for a vessel like Pencil on the Water. “She is a hugely popular design, so elegant and sleek. Either as originally drawn or with a modern twist, and updating the drawings to conform to the latest regulations, she could be something very special.” One thing that Denn was clear to mention is that the project took place in a time before today’s technological advancements in eco-friendly propulsion systems. With her long, thin aspect ratio hull form, she has the potential of not only being ‘green’ but also very fast. Pencil on the Water could be modified for a contemporary market. Though her interior was originally penned with a classic style in mind, with a grand, marble floored atrium with sweeping stairs leading to her upper deck, a new owner could have a lot of fun customising the existing design. 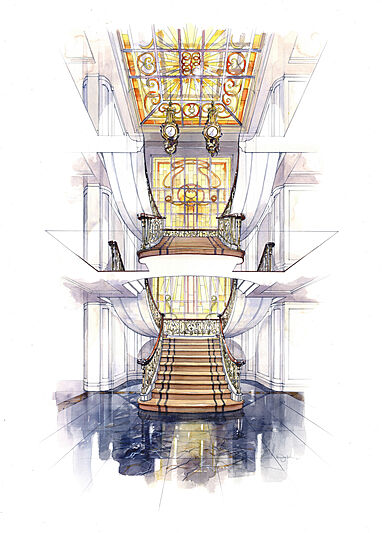 Aside from her obvious aesthetic draw, Pencil on the Water has some truly stand-out features, such as the 25-metre pool toward the stern of her main deck, partially uncovered and surrounded by sun beds. Denn mused “At the time we were doing a refit on a 25-metre yacht which had a 24-metre waterline length and they couldn’t believe we were drawing a superyacht which had a pool big enough to fit their boat in it!” Solutions on how to stop the free flow effect of the water included a lifting floor, gates and roll out nets similar to the concepts used in F1 racing car petrol tanks. 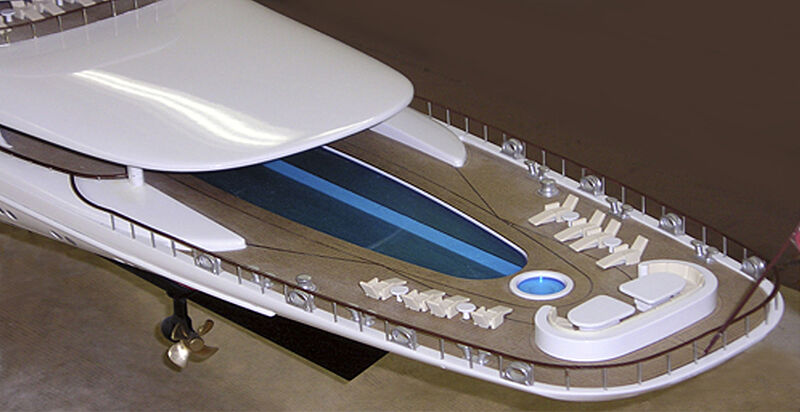 Photo: Clifford DennIn one of the design progress meetings, the owner’s captain offered to make at home a simple scaled down 80 cm long wooden model of the vessel, to give the owner the opportunity to physically hold and examine the vessel. No one, least of all Denn, who knew how difficult it is to make a proper model, believed the captain would manage. But it was a work of art and the owner loved it! The owner was so enthusiastic that he had a full professional 1:100 scale model made of her which he still keeps aboard his current yacht to this day. Denn commented “He loves the design we drew for him and is incredibly proud of the model aboard his superyacht, which takes pride of place. Truly this vessel deserves to be afloat! She is a beautiful yacht and I am sure that with hindsight he would love to have built her.”

Today, Pencil on the Water is awaiting a passionate owner who has a sharp eye for elegant lines and is drawn to her graceful proportions. It would be a pleasure to see a superyacht built following the same design brief of timeless elegance and beauty.

She would certainly stand out from the crowd.