The third race of the J Class Falmouth regatta started at twelve o’clock as scheduled, with the first weak rays of sunshine and patches of blue sky that anybody had seen all week. The race began with Lionheart, Velsheda and Ranger approaching the start line together. Rainbow started to windward, locking the others out. Rainbow edged into the first lead, with Velsheda just to leeward, and Lionheart and Ranger following closely behind. The whole fleet were unable to tack with Rainbow locking them all into a long starboard tack. 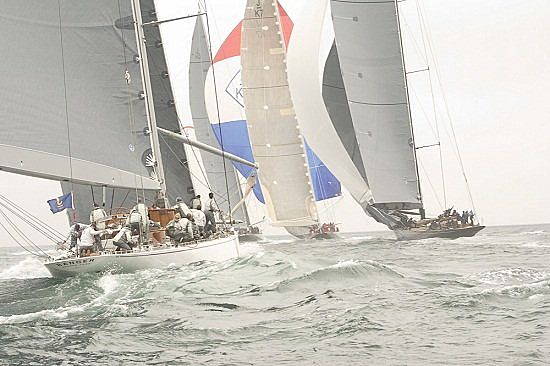 The boats arrived in a line together at the first windward mark, with less than a boat length between each. Rainbow turned first and was chased down to the 300 metre spacer mark by Velsheda, followed by Lionheart and Ranger. There was superb action from all the crew as they turned the spacer mark and launched their 10,000 sq. ft. spinnakers. 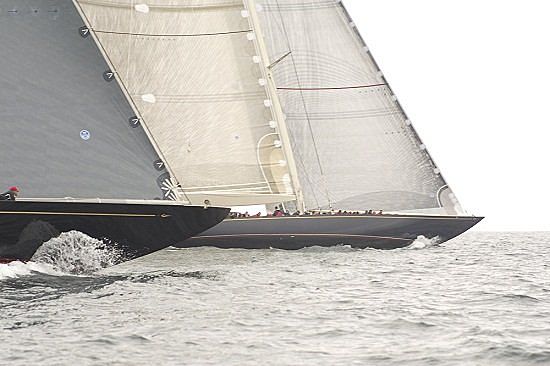 Ranger pushed past Lionheart on the first part of the downwind leg and climbed onto Velsheda’s windward side, in an attempt to overtake her. Lionheart, concerned at the opening gap between her and the others, raised her spinnaker staysail to increase sail area in a move that worked to stop them falling back but not well enough to close the distance. 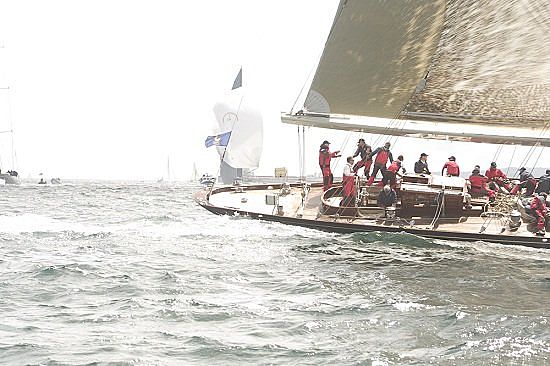 As the fleet approached the leeward mark, they disappeared into a thick bank of fog. Rainbow rounded first again, closely chased by the other three, just seconds behind. Rainbow struggled with the Spinnaker drop and lost ground, reducing but keeping her lead. The gap was closed further by Velsheda’s incredibly fast sail change, her crew’s experience showing in this area. For the first time in the race, the fleet split up and chose different tactics in an attempt to grab an advantage. Ranger and Lionheart went left while Rainbow and Velsheda sailed on towards the coast.

As the fleet split, they were all lost to the thick fog bank. When they reappeared, Velsheda and Ranger had moved ahead of Rainbow. 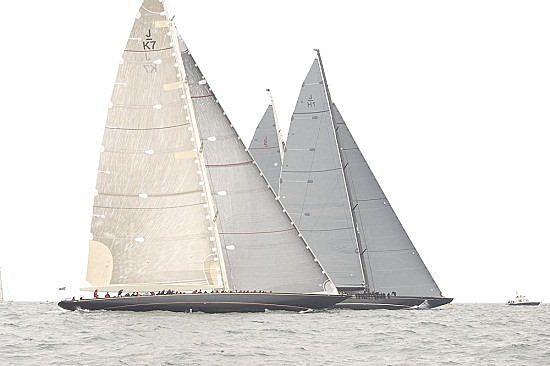 Before the next windward mark, a change of course was given by the PRO due to a change in the wind direction. Velsheda rounded the top mark first, followed by Ranger, Rainbow, and Lionheart. On the next beat-to-windward, Lionheart took a flyer to the right hand side of the course, which paid off as she beat Rainbow to the windward mark.

The race finished after three hours nearly as closely as it had started. Velsheda once more took line honours. Ranger came in second, just fifteen seconds ahead of Lionheart, whose persistence and tactical bravery bought her a third-placed finish. Rainbow powered down towards the line but couldn’t close the gap.