Dykstra Naval Architects and Holland Jachtbouw has released a rendering and further information regarding the construction of the highly anticipated replica of Yankee, the J Class Yacht that defended the America’s Cup in 1930. 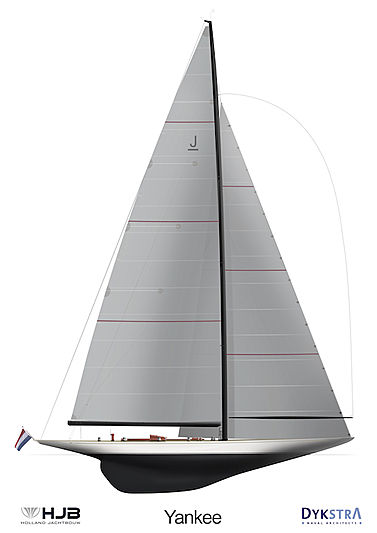 The original Yankee was designed by Frank Paine. Dykstra Naval Architects has retained the same clean design and flush deck layout and focused their efforts on optimising performance within the new JCA rating system using their own VPP programs and CFD and FEM analyses derived from over 30 years’ experience in rebuilding, refitting and building new replicas of seven J Class yachts.

Designer Jeroen de Vos comments, “These boats were designed to race and that is the idea behind the new Yankee. Our experience of sailing on very different boats has taught us that bigger is not necessarily better. It’s all about waterline length, not length overall. So rather like Rainbow or Endeavour, the new Yankee will be quite small and light and very nimble.”

The deck layout will be kept as simple and efficient as possible to ensure easy handling by the crew, increasing the performance potential when it comes to the race. As de Vos states, “We’ve seen that it’s crews that win races. If you mess up the start, the race is almost over before it’s begun, so the crew has to be able to handle the sails and deck gear quickly and easily.”

Holland Jachtbouw has exclusive ownership of the rights to build the Yankee designs and, following the latest refinements, is now ready to begin construction. Upon her completion, Yankee will return to race in the America’s Cup in 2017, marking the first time in history that more than five J Class yachts have ever raced against each other in a no doubt unmissable event.