The Monaco Yacht Show 2011 saw Codecasa Shipyards unveil their new Vintage Series through the exhibition of the first unit of the Codecasa 42 Vintage Series, Hull F73, to resounding success amongst industry fans and experts.

Two years later, that same success was strengthened through the launching of the sister-ship, Hull F75, completed in July 2013. Same as the previous Yacht and still fully representing the distinctive and identifying traits of the whole line, this hull was also inspired by a classic style and traditional lines in both exterior and interior design.

The new Codecasa 43 Full Beam, which is currently at the early stages of construction at the Codecasa Shipyard, will offer more comfortable working and service areas around the tender installed in the aft garage. 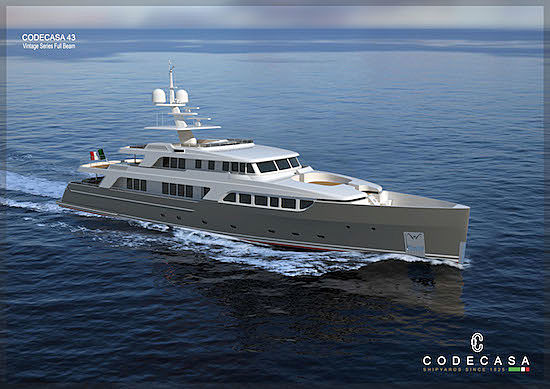 The full beam layout of the owners suite, located forward on the main deck and featuring larger spaces than on these two units, enables the addition of a private office inside the owners apartment.

Codecasa 43 Full Beam will also include a cabin for the captain in direct contact with the bridge, larger and brighter hallways and a panoramic staircase that will connect the three interior decks. An exterior living area with sofas and tables will be created in the Portuguese Bridge, obtaining an extremely private and reserved space whilst the Sun Deck will be furnished with a jacuzzi tub.

Equipped with two Caterpillar 3512 C main engines (1.650 HP each at 1.800 rpm) able to reach a top speed of 16,5 marine knots in light displacement conditions and a range of 4.000 nautical miles at the cruising speed of 11 knots, the Codecasa 43 Full Beam Vintage Series will be another excellent achievement for Codecasa Shipyards.