After three successful deliveries of the Codecasa 65 between 2008 and 2010, the shipyard have presented a new project of the flagship of the displacement yacht series signed by the Viareggio shipyard. 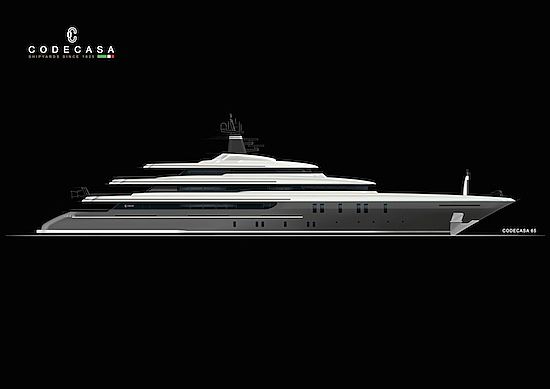 The new Codescasa 65 reviews and highlights the distinctive features of the previous three hulls that contributed so greatly to their success. An elegant yacht with a masculine profile, the vessel displays a synthesis of the Codecasa nautical tradition with the classical lines of evolution.

Featuring large interior volumes, the new superyacht is distributed over four decks, with the main deck entirely devoted to the reception and hospitality thanks to the huge salon and the adjacent dining room. The upper deck consists of a generous owner’s suite with direct access to an exclusive external living area forward, whilst guests are accommodated over four cabins on the lower deck.

The final outcome is a yacht poised in the hull and superstructures distribution using as few lines as possible and limiting itself to the essential ones, without renouncing to the solidity of the whole.