Palumbo Superyachts has rolled out its latest in-build superyacht project at its facility in Ancona: the 79.9-metre Columbus Classic motor yacht Dragon. With the vessel expected to be delivered this year, the shipyard has teamed up with Hydro Tec for her exterior design and Francesco Guida Design for her interiors. 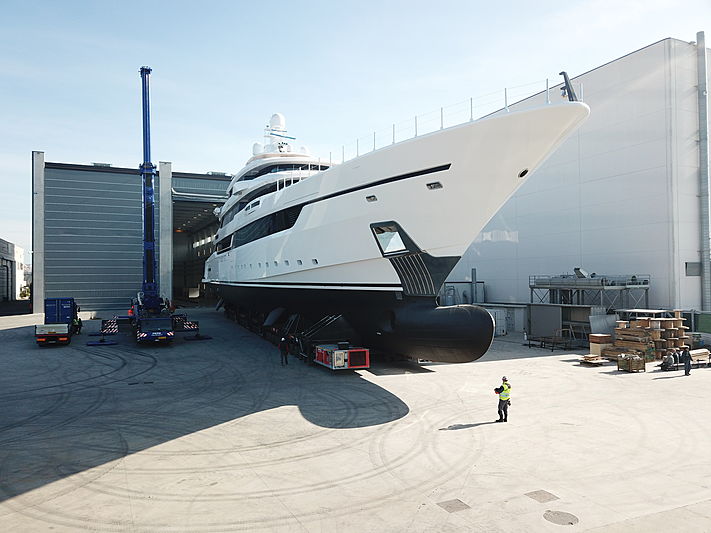 Photo: Palumbo Superyachts Motor yacht Dragon has been built with a steel hull and aluminium superstructure and features a flush foredeck and full beam upper decks, as well as a gross tonnage of over 2,100GT and is by far Palumbo's largest new-build yacht project to date.

Dragon is the biggest project to be built for the Hydro Tec team, which was responsible for the naval architecture, exterior styling and general arrangement of the vessel. Begun on speculation in 2012 and sold in 2016, the project was originally several metres shorter and Hydro Tec was called in to revisit the design and engineering and completely upgrade the layout. Going forward, the resulting technical platform will serve as the basis for future 75m-plus projects by Palumbo Superyachts. 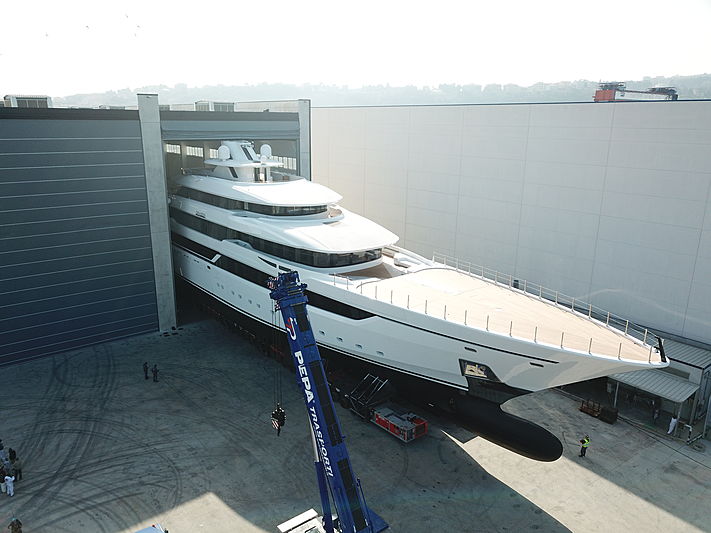 Photo: Palumbo Superyachts Arranged on four levels as well as an under-lower deck, the guest accommodation on the main deck comprises four double cabins with beds facing outboard and a full-beam VIP suite with a private lounge that can also serve as an extra cabin with ensuite. Up to 12 guests are accommodated for on board as well as a crew of 19.

The upper deck is reserved for the owner's personal use and includes a forward suite with wrap-around glazing and direct access to a private lounge area on the foredeck and the helipad. The apartment also includes a large office, a separate dressing room and a sauna. 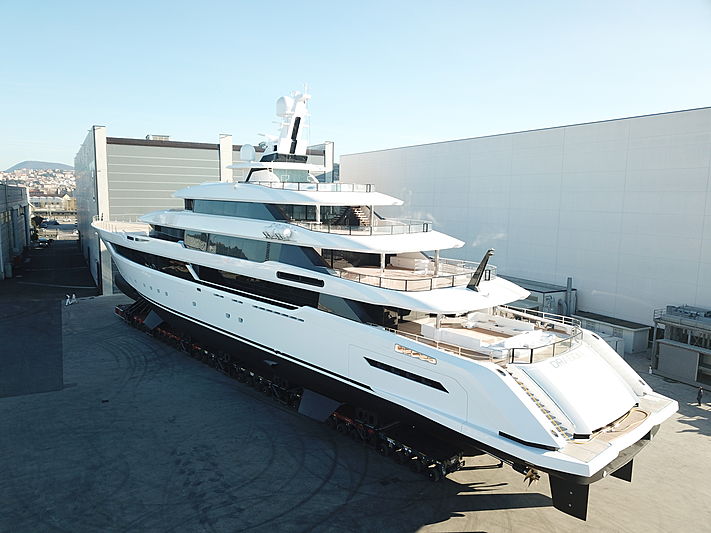 Photo: Palumbo Superyachts The sundeck on board motor yacht Dragon features a six-metre pool with integrated hot tub and waterfall feature cascading from the overhanging room structure. As well as the transom platform, the beach club has fold-down side platforms and is equipped with a sauna and hammam. Amidships on the starboard side is located a side-loading garage for two tenders, including a 9.5m custom limo tender being built by ISA Yachts to mirror the styling of the mothership.

On the lower deck, water-level access on the starboard side means that guests can alight from the tender and take the lift straight to their cabins on the deck above. 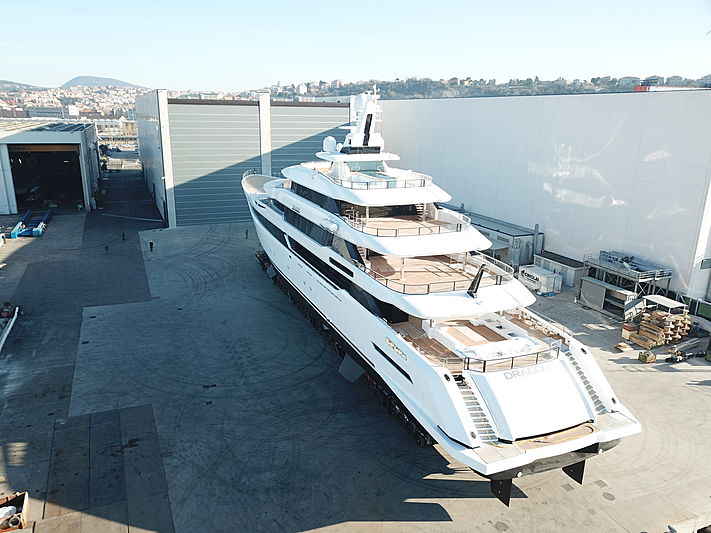 Photo: Palumbo Superyachts Neither interior renderings nor images have been released of the vessel, but the sophisticated and calming decor by Francesco Guida is based on contrasting light and dark oak veneers with American walnut for the parquet flooring and satin-gold finished door handles and lighting fixtures. Natural and moonlight Travertine marbles feature throughout, while the beach club features backlit surfaces of semi-precious agate. 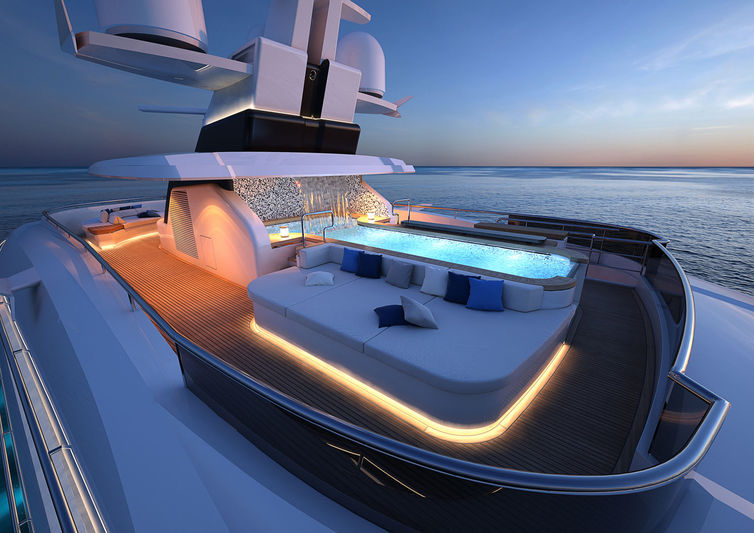 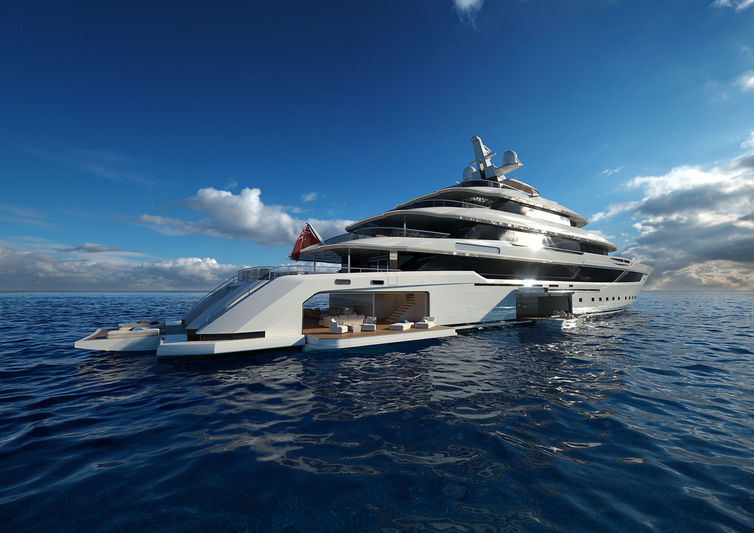 A closer look at Dragon: the 80m Columbus Classic superyacht