Mulder Shipyard in the Netherlands has started construction of the new Mulder 98 Flybridge, the contracts for which were signed earlier this year. The yacht has been designed by Guido de Groot with Jaron Ginton in charge of the naval architecture. The Mulder 98 Flybridge is being built for a client from Russia, and will be delivered in the second quarter of 2013. 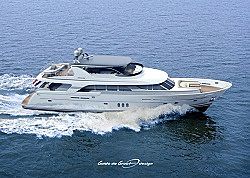 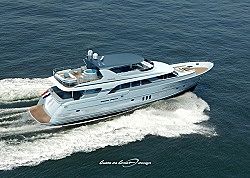 The Mulder 98 Flybridge has a length of 30.00 metres over all, and a beam of 6.90 metres. It will be powered by twin Caterpillar C32 engines with a capacity of 1600 hp each, offering a maximum speed of 22 knots. The yacht has a fuel capacity of 17,000 litres, providing a range of 4,000 nm at ten knots. The hull will be built in accordance with Lloyd’s classification.

The new Mulder 98 Flybridge will be the first yacht to be launched from the new Mulder Shipyard yard. This second facility situated ten kilometres from the current Mulder yard will cover an area of 7000 square metres and focus on the maintenance, refit and new build of yachts between 18 and 40 metres.

The Flybridge yachts have been a major international success. Another Mulder 98 Flybridge was delivered to an Egyptian client in 2010 and the yard recently sold a Mulder 73 Flybridge to an Australian client who had seen the New Zealand-owned Mulder 76 Flybridge Dutchess at the Auckland yacht show. Several other boats have been built for owners from Russia, Spain, Germany and Italy.