Cowes Harbour Commission (CHC) is co-ordinating the recovery of the motor yacht Kahu from the river bed in East Cowes, and the ensuing environmental clean-up operation, following a devastating fire onboard the yacht which resulted in the vessel foundering on Tuesday night, 5 November. 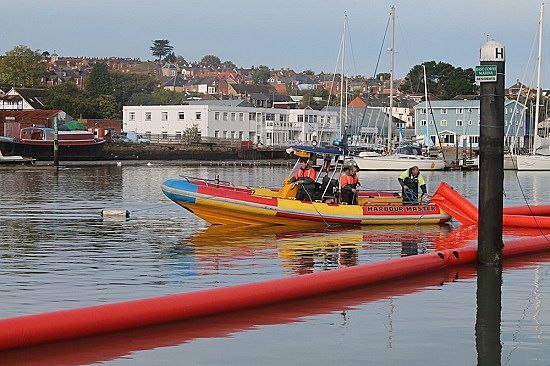 The Isle of Wight Fire and Rescue Service led the emergency response to the fire on Kahu, and CHC was active in providing support and assistance. Cowes Harbour Master Capt. Stuart McIntosh attended all Fire Service control meetings, and CHC’s Seaclear vessel was offered and proved to be extremely helpful as a water borne platform for the firefighters.

The operation is now focussed on the salvage and disposal of the Kahu, which is being co-ordinated under Cowes Harbour Master’s supervision. Capt. Stuart McIntosh is liaising closely with the appropriate authorities, and said: “We are currently in discussion with the yacht owner’s insurance surveyor and developing the salvage plan, and will soon be confirming that divers and salvage companies can proceed with the salvage in accordance with the agreed salvage plan. We expect the vessel to be recovered within the next 48 hours.”

The submerged vessel is to be raised off the seabed, utilising air lift bags to bring it up to just below the water surface. A crane will then lift the hull top clear of the water level, in order to allow water in the hull to be pumped or drained out. Once this has been achieved the vessel will be placed on a bunded flat top barge for transportation to a disposal site.

“As part of the salvage operation,” continued Capt. McIntosh, “CHC will be prioritising a detailed anti-pollution plan, to ensure pollution does not occur, or is minimal, during the salvage and subsequent transportation stages. To this end, we are consulting our experts in this field, Adler and Allan, the MCA’s Counter Pollution Officer, and other appropriate authorities, such as the Solent Environment Group who are holding daily meetings whilst this incident is ongoing.”

On site at East Cowes Marina, oil booms have been deployed which can cope with the flood and ebb tides, and a 360 degree boom has been placed around the sunken vessel. These oil booms are designed to catch any oil escaping from the sunken Kahu, which is then skimmed off the water and put into tanks to be taken ashore. It is estimated that approximately one third of the yacht’s diesel fuel has been recovered so far and removed ashore into a road waste oil tanker with the remainder still in the fuel tanks of the yacht. Adler and Allan will continue this oil containment and removal until the risk of pollution has been eliminated, with the boat lift and transportation completed.

Meanwhile, CHC is carrying out inspections on the River Medina and around Cowes Harbour to check for instances of pollution. CHC is not aware of any significant environmental impact to date. CHC has issued an Emergency Temporary General Direction which restricts the transit of vessels over 48m in length without the written permission of the Harbour Master.