In a British summer that's trying to convince us to head to the Med there's a powerful counter. It's called the wind, and albeit with more than a few buckets of rain thrown in, it served the Oyster Cowes Regatta well with a cracking first day's racing. In both Classes 1 and 2, Oysters 55 and above making Class 1, the lead boats slugged it out in fearsome competition with good tactics closing gaps that waterline length at times failed to stretch. 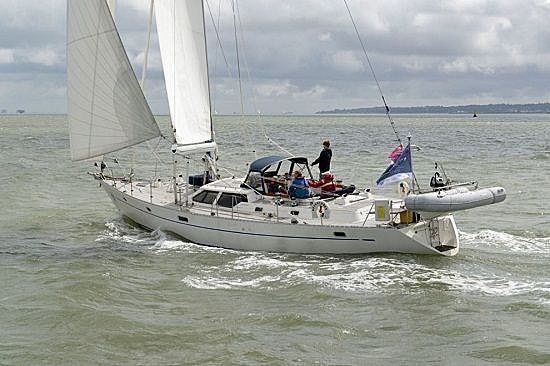 Much of the fleet is familiar with these home waters but the day was not without its surprises. While the flagship Oyster 82 Starry Night of the Caribbean romped home to a polished first on the water and corrected time with circuit star Campbell Field as race captain and navigation by top charts man Rodney Barton, Andrew and Ann Walter's 56 Asante sailed a blinder too, coming in an impressive three minutes and one second behind on corrected time, with Charles and Nicky Manby's brand new Oyster 575 Isis just a little under a further four minutes back. As familiarity builds, there may be a little more over the shoulder monitoring. From Asante's foredeck, Vladan Jovanovic, was positively beaming, "A great race, last leg just unbelievable. The course was really beautiful, very challenging, tide, wind variation, everything… incredible." 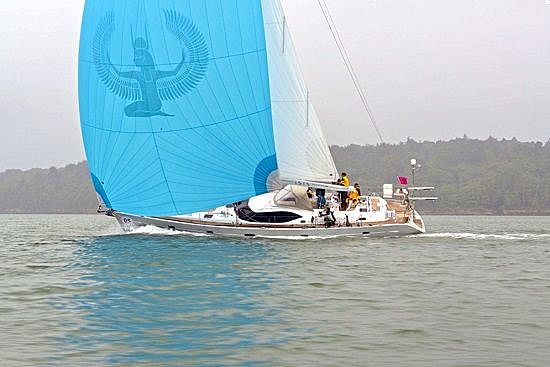 Richard Smith, owner of Oyster 655 Sotto Vento, fourth after Isis, and a veteran of 15 Oyster regattas, is here sailing in tides for the first time and in weather a little less clement than their usual Caribbean sailing. "It's not sunshine is it," he quips, "but the wind's been great, we don't often get it like this in the other regattas. It's good. We've also learned we don't have to do things too quickly, and my new skipper Matt says Sotto Vento performs like a dinghy. Today we just did too many things too late and too many too soon!" 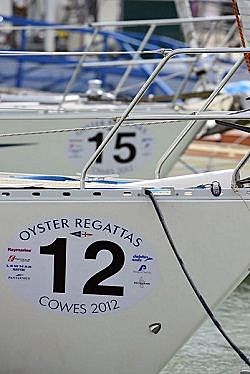 Class 2 saw a battle too, not just for corrected time but also with very close matching on the water. The two Oyster 53s, Clifford and Sally Sturt's Spirit of Epsilon and Simon Timm's Nutcracker rattled not just each other but also the flush-decked Oyster SJ41 Prince de Petarcq owned by Bert Janssen from Belgium, who none would have judged by his calls to be a stranger to these waters.

It was only in the final stages of the 2½-hour, 16 mile course that the pack split and two tactical decisions, East or West of Bramble Bank back to Prince Consort, and then, when across, whether to put another tack in or head to the soft tide inshore settled the ranking. A real star call came from elsewhere in the class, but more later. Prince de Petarcq took line honours but second overall, while Spirit of Epsilon piled in second but took first on corrected time. And an extraordinary coincidence should not go un-noted, first and second in Class 2 were parted by the exact same three minutes and one second as Class 1. How tidy!

With the Solent busy with the 83-strong Panerai British Classic Week fleet plus 40 Sunsails out course bashing, marks are in big demand, but the Royal Yacht Squadron's race team of around 20 headed by Simon Van der Byl set managed courses well.

As Simon says, "We set some shaped courses with 2½ extra miles for Class 1, and we were very pleased with that last beat across the tide, everyone had to think about that, as they had to for the first long reach, too."

Starting the classes 20 minutes apart, the later Class 1 benefitted from a more southerly swing in the wind, which helped those who in the pre-start roll call had nominated downwind rather than white sail handicapping. Class 2 suffered through a finer reach than had been anticipated with a turn in the breeze but Spirit of Epsilon, further out in the channel saw the advantage. "We could see around Norris Point and boats there weren't running, so the right call was white sails." That proved wise and the first boats through with Epsilon with kites suffered a fine reach to 'Peters & May' and then fell low below 'Good Acre Yacht Repairs' under the mainland except Prince de Petarcq, which gybed back and forth with the perfect line. The three continued to challenge and in the closing stages, as Epsilon owner Clifford Sturt explains, "Nutcracker was leading along the North channel, we had to do something and as Nutcracker continued west we decided to go east of Bramble Bank and then get close inshore to the island… and it worked!" First corrected was theirs. 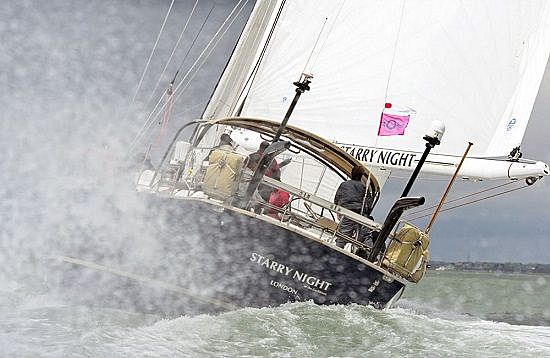 Another to seek the island shore, but even earlier, was the Oyster 435 Parton with a race and regatta novice crew who played a blinding hand to finish fourth, sneaking quite a few places up the fleet. The two husbands and wives crew, owners David and Linda Pedley and Linda's sister Ali with husband Julian Wright had their first ever pole practice at 9am that morning, before this, Linda and Ali having never raced at all. "We tend to cruise with our children mostly," says David, "but based in Port Solent we spend a lot of time out here. We'd been trying to guess where we might come, but we didn't think we'd be just three and a bit minutes behind the winner. Mind you, it could have gone the other way!" Yes, but actually the start was rather good, too, trumping as they did Nutcracker. Simon Timm on Nutcracker will be looking to change that, and the finish tomorrow.

Another that Parton snuck through was the aft cockpit 42 Sundancer sailed smartly by owners John Nelson and Phillip Riesco, who despite the shortest waterline length in class held the middle well between the clearly defined front and back of fleet pulling distance continually until the bigger winds of the final beat overpowered a little and laid her lower on the breeze. An excellent sail though, in a superbly kept boat now 14 years old with still everything original, excluding of course modern addendum but including the same upholstery as when launched. You wouldn't know it. But that's the secret of Oyster.

The day rounded off on a distinctly Caribbean note, with crews from the Oyster Regatta joining crews from the Panerai Classics Regatta fleet for a superb barbecue and dancing at Cowes Yacht Haven.