Home > News > Ocean Warriors: Crew life on board 56m Bash amidst the pandemic

When the Benetti motor yacht Bash first attempted the crossing from the Caribbean to the Med in early March, COVID-19 had not yet been declared a pandemic. The crisis escalated rapidly while the yacht was making its way across the Atlantic. As countries went into lockdown one after the other, what would have been a normal transfer turned into a coronavirus odyssey that led to the crew dubbing themselves the ‘Ocean Warriors.’ The following account of the passage, based on conversations with the yacht’s captain Dean Homan during the voyage, highlights the unprecedented difficulties faced by yachts and their crews in a locked-down world. 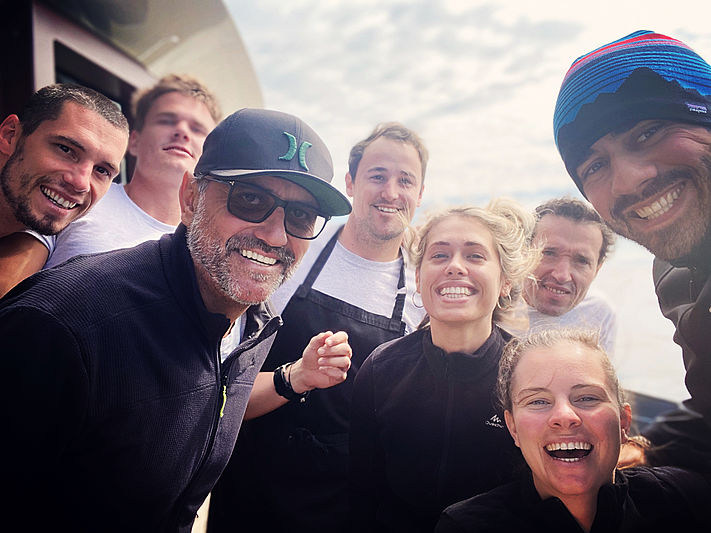 Captain Dean Homan was planning on taking some well-earned leave when the owner of Bash left his 56-metre yacht in St Maarten on 28 February after a late Caribbean season cruise. The English captain changed his mind at the last minute because the yacht was taking on a rotational watch officer and he thought it would be a good time to go over the running of the boat during the transfer to the Med. Coronavirus was in the news, but it seemed at the time to be mostly a Chinese problem.

At first, it was the weather that was more of an obstacle than coronavirus, and the original plan to leave on the same day the owner disembarked had to be aborted due to bad weather. The Azores High, typified by relatively consistent high pressure that pushes bad weather northwards, had yet to establish itself and a steady stream of lows was running across the Atlantic from west to east without a break, making long-range forecasts difficult to predict. A weather window finally presented itself on 5 March and Capt. Homan made a dash for it, only to be forced to return to St Maarten when the weather ahead closed in again. 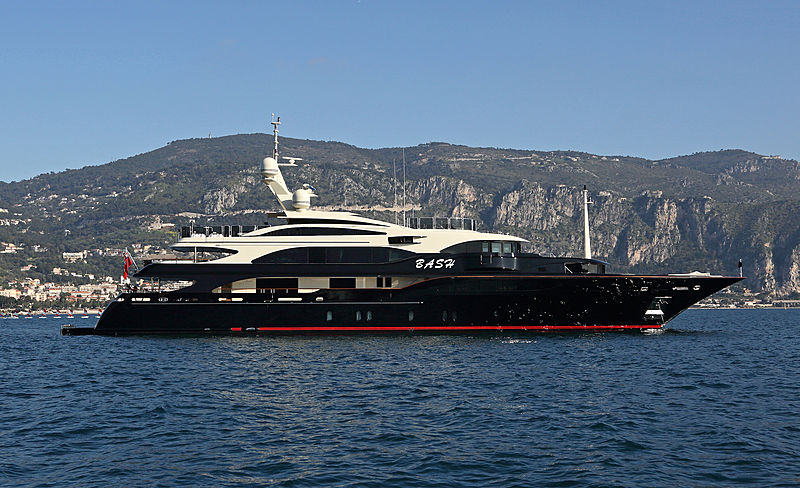 "At this point we had another complication,” says Capt. Homan. “We had a delivery crew on board with other jobs to go to, so we had to take on our rotational crew, including an officer of the watch whose wife had just given birth. By this time coronavirus was making itself felt in Europe and it was becoming much harder to travel, making it difficult to fly crew in and out.”

The crew issue was exacerbated when a relief deckhand also left the boat. Capt. Homan searched everywhere, including the US, Costa Rica and Mexico, without luck, so he finally decided to fly a candidate in from France who could leave immediately. This happened late at night on 13 March when the plan was to leave the following day to take advantage of a 12-hour weather window.

“I discussed with my officers the pros and cons of doing the crossing shorthanded, but we knew the Atlantic was going to be an issue,” says Capt. Homan. “We already had the chef and two junior interior staff on board, one of whom has only been in the industry a couple of months. If one of us got sick we decided it would be better to have as many people on board as possible.” 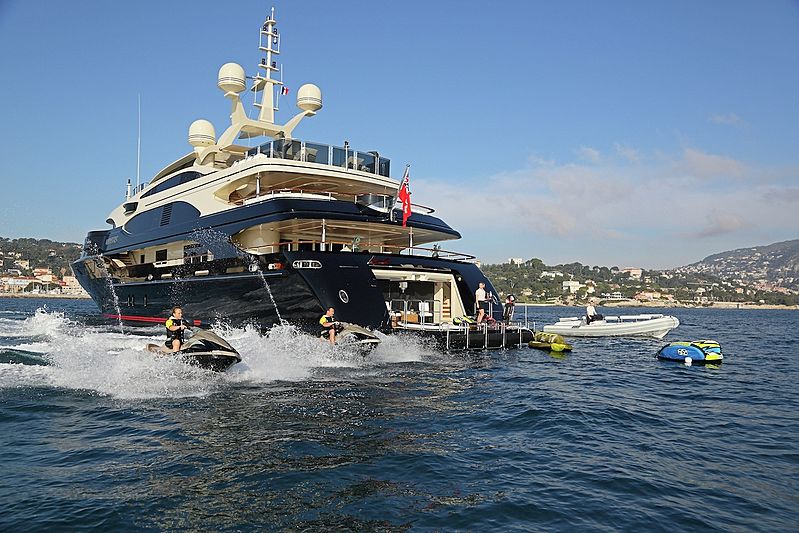 By now coronavirus was running rife in Italy and the yacht’s DPA (Designated Person Ashore) required new crew to fill out a health declaration. Due to the late hour, Capt. Homan had to read out the form over the phone to the new deckhand, who declared he had no existing health issues and caught an early morning flight bound for St Maarten. He arrived in the afternoon of 14 March and was rushed through immigration (some passengers on the plane from high-risk countries were refused entry). Bash was already sitting at anchor outside the Simpson Bay Bridge and shortly after the deckhand was aboard the yacht got underway. The morning after when Capt. Homan came on duty, however, he was told that the new crewman had been seasick on watch and heard coughing during the night.

“I called him up on the bridge, keeping a safe distance from him, and he told he’d had a cough for a couple of days,” says the captain. “I couldn’t believe he hadn’t said anything when I’d read him the health declaration over the phone and before boarding. We’d already established contingency plans in case someone got sick and he went straight into isolation. So not only did we have one man down, but we also had to look after him and take his temperature twice a day, putting other crew at risk. Luckily, he never developed a fever." 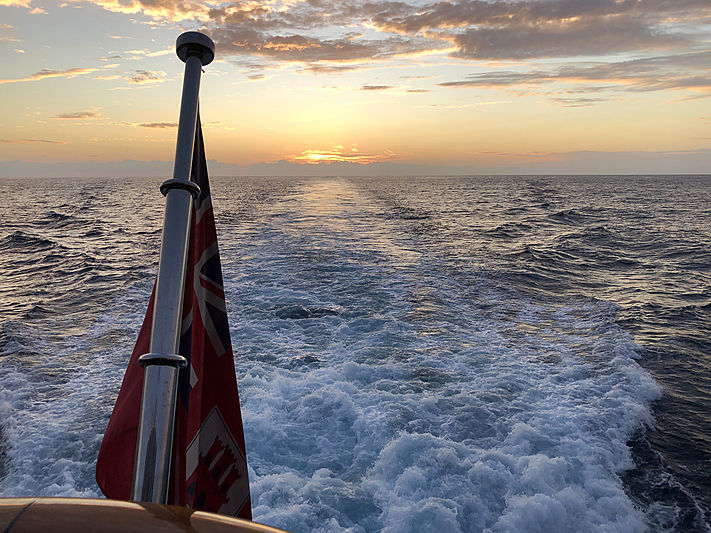 Photo: Bash yacht crewThree days out from St Maarten the crew learned that the island had shut down, so returning was no longer an option. Nor would they be allowed to dock in Tenerife but had to anchor 12 miles offshore. As Bash had been powering her way across the Atlantic to avoid the worst of the weather fronts, she was burning fuel fast and there was some urgency to find an alternative stopover.

The DPA managed to get permission to dock in Lanzarote, but the weather was against them and they had to divert from the Canary Islands to the Azores, where the shipping agent was able to get approval to take on fuel in Ponta Delgada. Technically, they were supposed to go into a two-week quarantine, but Capt. Homan had already decided to self-isolate the yacht and crew before pushing on. Just before arriving, he also found out that his partner in Antibes was displaying symptoms consistent with COVID-19. It was about now that he started referring to his crew as the ‘Ocean Warriors’ in his Facebook posts.

“When we arrived in Ponta Delgada on 23 March there was no direct contact with anyone on shore,” says Capt. Homan. “We all wore masks and gloves - and everything – even the heaving lines – had to be disinfected before coming on board. We needed to stay healthy and keep up team morale, so we had workout sessions each morning and played Keepsey Upsey with a tennis ball!” 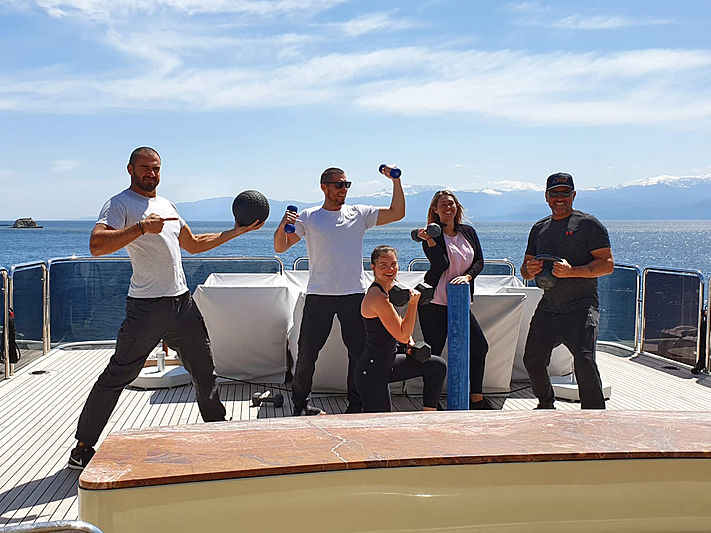 As they set off on 27 March, the new crew member came out of isolation, but then immediately came down with a stomach bug and was confined to his cabin again. Now more a hindrance than a help, Capt. Homan was determined he should disembark at the earliest opportunity. The problem was, where?

Permission to land the crew member was denied in Gibraltar. The next best bet was Algeciras, one of the biggest commercial ports in Europe, and the yacht drifted offshore for 15 hours before it was allowed to anchor in the bay. At dawn on 31 March, an agent’s boat came out to take the incapacitated deckhand ashore. A request from a family looking to charter the yacht for a month to escape the pandemic was turned down due to the complications associated with embarkation and cruising grounds. 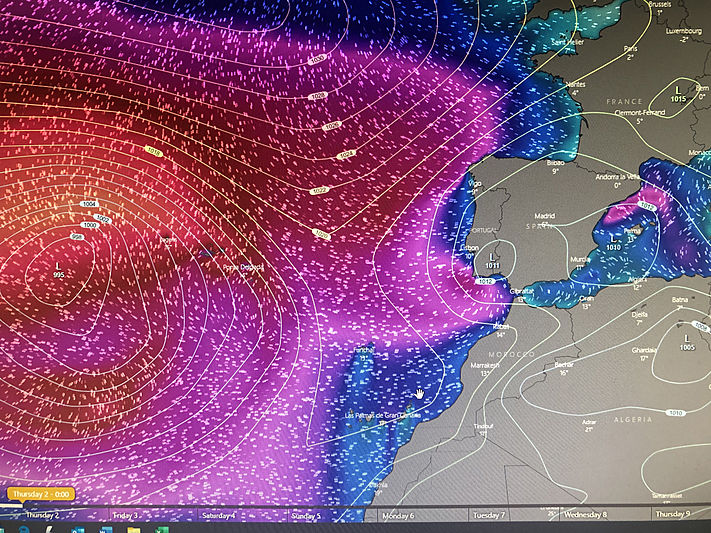 As more and more countries went into lockdown, the voyage took on a whole new dimension as Bash continued east along the north African coastline. When the weather worsened the yacht attempted to shelter in Béjaia in Algeria, but was told to stay outside on anchor. At one point the Algerian navy told them to move offshore into international waters, but with the weather worsening the captain refused.

“That was a rough night,” recalls the captain. “One of the problems throughout has been that we were dealing with commercial ports who have no idea how yachts operate. We’re not a cargo ship. We’re a modest-sized superyacht by today’s standards and there’s no way we can anchor in 60 metres of water, a three-metre swell and 50 knots of wind.”

The weather took a turn for the worse the following day. The yacht was denied shelter in Tunisia except to anchor in a very exposed bay, and was not even allowed to enter Maltese waters where a military ship was keeping watch. The only place that would accept them was Riposto in Sicily. With gale-force winds imminent and nowhere else to hide, there was no other alternative but to head for the Straits of Messina. 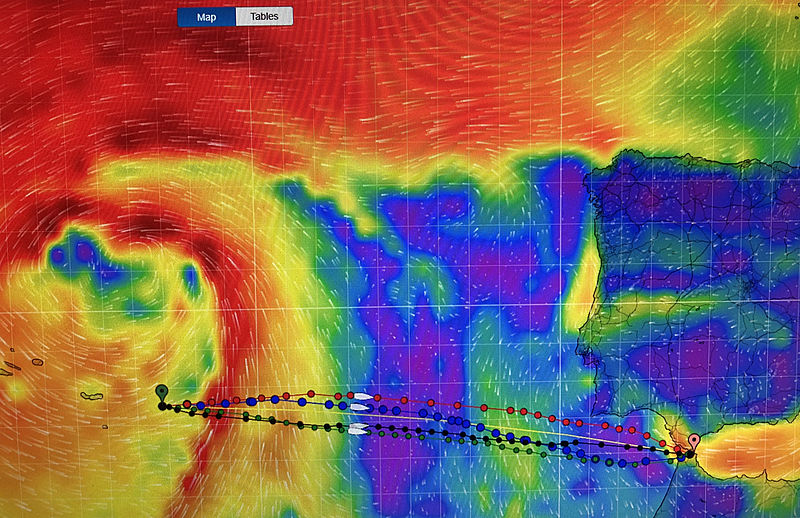 “We arrived in Riposto on 4 April just as the weather went wild,” says the captain. “It was so bad that we had to make a dogleg to enter the port and virtually surf in on the swell. Once inside, it was still blowing 40 knots and we burst a fender and snapped two lines. But the Italians were great and I’m eternally grateful to them for letting us take refuge.”

Two days later and Bash was on the move again. Passaging south of Kefalonia, where a request to quarantine in Kefalonia was refused, they again ran into bad sea conditions. For a yacht the size of Bash the short wave periods in the Mediterranean were actually more punishing than the bigger but longer swells in the Atlantic. A Facebook video posted by Capt. Homan approaching the Rio-Antirio Bridge crossing the Gulf of Corinth near Patras shows winds peaking at 57 knots on the bridge anemometer, white water pouring over the foredeck and the wheelhouse windscreen wipers working overtime. Another photo shows his uncut hair being blown straight up from his head. 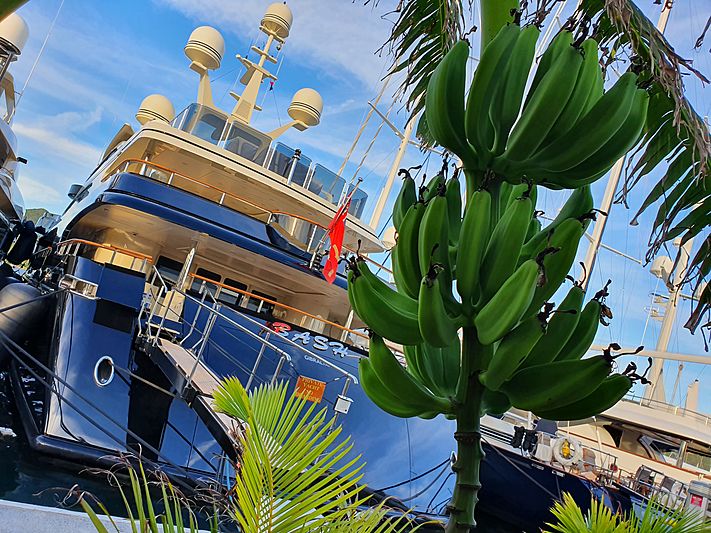 Photo: Bash yacht crewOn 7 April Bash dropped anchor near Itea to wait for the weather to abate before transiting the Corinth Canal into the Aegean Sea. The voyage was far from over and Capt. Homan was still uncertain where they would be allowed to make landfall, but at least the long sea passages were over and the yacht was in more protected waters.

“I must say everyone involved, from our managers and agents to the owner’s rep and indeed the owner, have been brilliant throughout and never put us under any pressure to proceed at all costs,” says Capt. Homan. “Without the help and support of that network, including our weather routing service, I doubt we would have been able to get this far. The crew have also been amazing. We’ve been through some horrendous conditions, but they never flinched or complained. I take my hat off to them.” 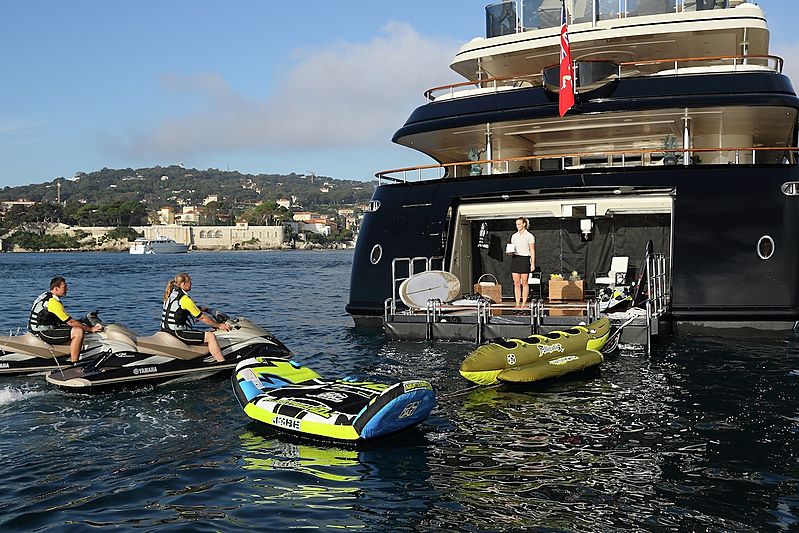 By 10 April the weather had lifted and Bash was able to pass through the Corinth Canal without incident. After such a long passage in rough conditions, Bash was beginning to develop technical problems, so once through the canal the yacht contacted the port authorities in Perama just outside Athens to request refuge. The yacht was told to anchor offshore among the commercial shipping and a tug boat was sent out to tie up alongside, but Capt. Homan refused the assistance because he was concerned that the extra weight would put undue strain on the anchor. Permission to dock came through the same evening. With one generator out of action, the last stressful episode of a trying voyage was docking without the bow thruster.

“After a 29-day passage from St Maarten, dodging some extreme weather and having to deal with a world in crisis, we finally docked last night in Perama, Athens,” a relieved Capt. Homan later wrote on Facebook. “We now have to quarantine for 15 days. Thank you all for your support during these weeks and hopefully we will all soon be able to get our lives back. A big thank you to the crew and our support network that got us here. Stay safe everyone.”