On saturday, in a private ceremony in Ancona, CRN launched superyacht J’Ade, a 58.2 metre steel and aluminium superyacht. The launch, held in a private marina, was attended by the owner, the yard's management, and CRN and Ferretti Group staff. J’Ade is the yard's seventh yacht in the yard's 60 metre series. 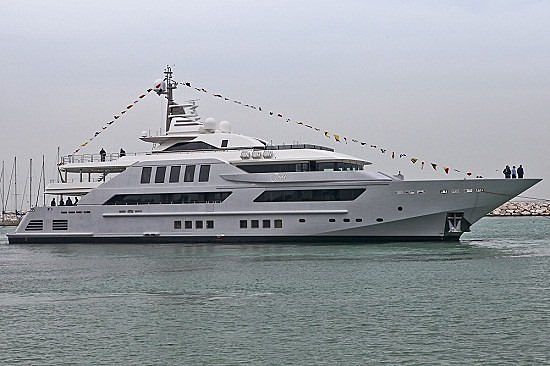 The yacht is powered by two MTU 12 V 4000 M 63 1500 kW engines, providing a top speed of 16 knots and a cruising speed of 14 knots. She has all the usual CRN features, such as a large folding stern platform with a beach club, as well as private balconies in the master stateroom. Designed by Studio Zuccon International Project, in close collaboration with CRN Technical Office, J’Ade is designed with full height windows of the upper salon, providing a wide panoramic views, and for the first time onboard a CRN yacht, a floodable tender garage.

Lamberto Tacoli, CRN Shipyard Chairman and CEO, gave a speech at the ceremony, declaring: “It is definitely a very important step, just like all the other launches, in which we pride ourselves on the great work carried out and the pleasure of having a ‘product’ representing the company in the most beautiful seas and harbours around the world. My thanks today go to CRN’s skilled workers and team who have made it possible to reach this new milestone, in which we take pride. However, CRN looks ahead and plans a way forward which offers great attention to the client, details and after-sales services”.

“The Shipyard is in full swing and the next launch, that of an 80 metre, will be held in less than two months: all our efforts aim at maintaining CRN’s position in the elite world of shipbuilding”, concludes Tacoli.