Last saturday the CRN shipyard in Ancona launched the CRN 130, a 60 metre steel and aluminium superyacht. 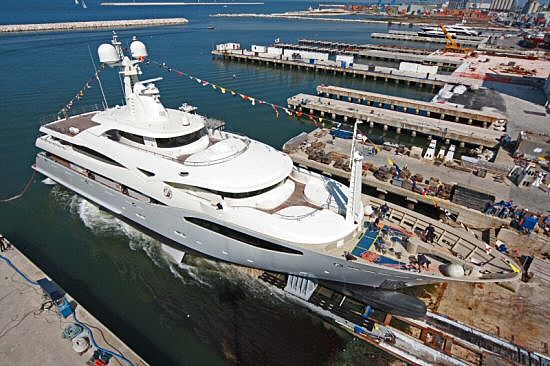 The owner’s family, the management and the workers of CRN were all present at the launch and hapily celebrated the completion of the seventh pleasure ship of 60 metres produced since 2005 .

Lamberto Tacoli, Chairman of CRN S.p.A. and Chief Sales & Marketing Officer of the Ferretti Group, who took part in the ceremony, spoke about the future plans of the shipyard: “CRN intends to continue its policy of maximum attention to detail, productivity, flexibility and customer care. I would like to thank all the workers once again and our team who have enabled us to realise this new target. Now we are looking to the future: the shipyard is in full production. We have another six ships under construction and the next deliveries should take place within the next few months”.

The new vessel can accommodate 12 guests in 5 guest cabins, the master cabin and 14 crew members. The yacht is equipped with two Caterpillar 3512B-C engines that allow a cruising speed of 14 knots and a maximum speed of 15 knots.