Last week the CRN shipyard in Ancona launched their fifth 60 metre superyacht since 2005, hull number 128. This latest 60 metre CRN superyacht was sold to her owners by the company’s Middle East agents, Sea Pros, who also have sold several other CRN yachts over the past few years. 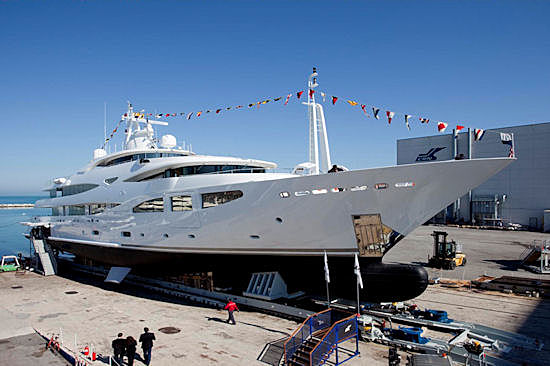 Present at the launch ceremony of the CRN #128 were her owners and family, the employees involved in her construction and design, as well as the management of the Ferretti Group.

Lamberto Tacoli, Vice President Sales and Marketing of the Ferretti Group and Chairman of CRN S.p.A. said: “We are particularly proud to launch our fifth 60 metre hull which is a great success not only for CRN, but for the entire Ferretti Group which, once more, distinguishes itself for excellent quality and for being in the forefront of the international nautical sector, confirming the strategy of aiming for the highest productive standards and the most ambitious objectives in terms of performance”.

“The relationship between the shipyard and the clients is central for CRN, and the participation of all those who have contributed to the creation of this 60 metre testifies this” as Vasco Buonpensiere, Brand Manager of CRN affirms.

The superyacht has been created in cooperation between the technical office of CRN for the naval architecture, Zuccon International Project for the exterior design and Laura Sessa Romboli for the interior design.