Just days ago, the new website of the CRN (www.crn-yacht.com), a shipyard that ranks among the world’s leading manufacturers of mega-yachts, building the high end of the product line of the company Ferretti S.p.A., made its online debut. Completely renewed in terms of both the graphic presentation and the mode of navigation available to users, the site provides the best possible combination of an original, refined creative idea and top-flight online performance, together with the latest trends in web communication, especially as regards the use of advance technology.

The new website, created by the digital agency Quadrante of Bologna, is part of a broader transformation of the overall image of the CRN brand, touching on every aspect of below and above-line communications, as well as on the brand identity of the shipyard in the Marche Region. The new advertising campaign launched in September, “Leave the World Behind”, is accompanied by a rejuvenated image involving institutional and product catalogues, plus packaging projects, all developed by the Unbranded communications agency of Milano, as part of an effort to reinforce brand awareness and transmit the distinctive values of the CRN name - also communicated online - such as luxury, uniqueness, innovation and elegance, in a refined tone of voice that never resorts to yelling. 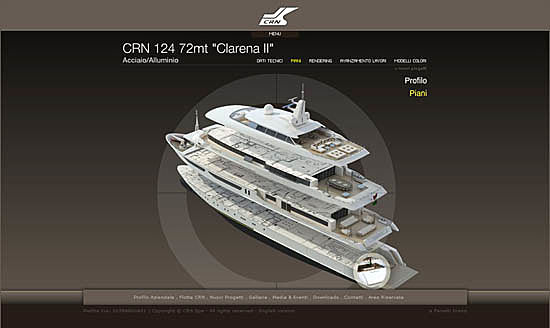 The entire site has been designed with three-dimensional graphic effects. Combined with the use of flash technology, these feature fully involve the visitors to the site, displaying the products in a manner that wins them over. Rather than a mere restyling of form and content, a whole new approach has been taken to the world of Internet, with increasing attention focussed on the user, who is transformed from a passive navigator to an active participant in an online reality that provides a noteworthy level of immersion.

Another innovative feature is the upgrading of traditional animated pieces into full-fledged applications that can be used to interact, navigate and select contents on the basis of their popularity or of the preferences of the visitor to the site. The result is a tool that permits high-impact communication of advanced technology and design, with the further advantage of presenting products and projects in an interactive mode.

The stirring homepage of the new site opens with a poetic excerpt from the Spanish film The Sea Inside, with music by the Cinematic Orchestra. In just a few seconds, this intimate, sophisticated window provides a metaphor that sums up key concepts of the CRN universe. The phrase with which the film concludes, “If earth is not enough, take it to the sea”, naturally becomes the theme of the site, emphasising the chief strength of the CRN products, which make ideal settings for enjoying the soothing beauty of the sea. 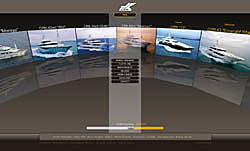 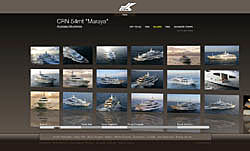 The heart of the new site is the section on mega-yachts. The vessels already launched are show in the “Fleet” area, which offers not only technical information, but also an extensive picture gallery, plus a video of the finished product, which can be called up using the chapter heading the viewer is interested in and even downloaded. New projects are also displayed, together with the ships currently under construction at the industrial complex in the Marche Region, on a portion of the site that emphasises technological and engineering features, with 3D simulations and renderings. The entire project has been designed in accordance with the most demanding parameters for accessing contents, so as to ensure that they are correctly positioned on the main resources of the Web, with optimised performance at different resolutions and using various combinations of browsers and operating systems, so as to satisfy the multifaceted demands of the world public.

Also included among the web-design features are a number of cross-media services sure to prove useful or interesting to visitors and meant to increasing the time they spend at the site. For example, there is an application for downloading the site’s videos on cell phones, while three areas with specific functions will also go into operation shortly, including a space that allows the shipyard to exchange web information with journalists and customers – under the protection of user names and passwords - plus a corporate WIKI for CRN employees, a tool sure to increase their involvement in the management of internal communications.

The CRN WIKI, made up of pages created by the users, can be utilised to share various types of files (images, videos and texts) developed by the community, as is done on forums. The comments on the contents are meant to result in the exchange, storage and optimisation of knowledge, creating value added on a wide range of discussion topics.