On 29 March, during a private ceremony, Ancona’s CRN shipyard launched Hana. The owner, who hails from the Middle East, attended the launch with his family and close friends. Hana is a splendid displacement yacht measuring 43 metres and representing the second hull of the highly successful CRN 43 composite line, whose first six vessels have already been sold.

After a few words from CRN President Lamberto Tacoli, as well as the traditional breaking of the bottle, the stirring ceremony reached the point where Hana was launched down the ramp: a thrill for all present, further highlighted by the notes of the well known aria “Con te partirò”, as well as the heartfelt applause of those on hand. 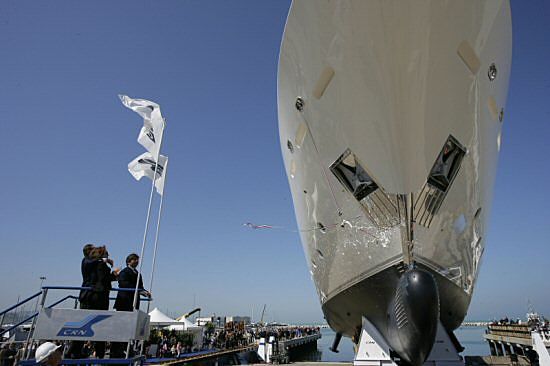 There was great satisfaction at the shipyard for the completion of the second CRN 43. At present, no-less than 22 superyachts are simultaneously under construction at the Ancona facititly. 13 Of them under the CRN brand name: 7 custom projects in steel and aluminium, at lengths of 54 to 72 metres, and 6 semi-custom composite vessels, measuring from 40 to 43 metres.

Hana can easily accomodate 10 guests and 9 crew members, and she navigates in complete comfort at a maximum speed of 15.5 knots and a cruising speed of 13 knots. 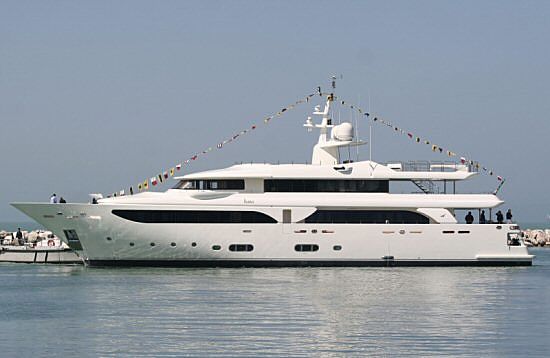 Built in collaboration with the Zuccon International Project firm, the yacht is set apart by the noteworthy size of its four decks and its extensive open-air zones, such as the covered areas of the main deck and the upper deck.

Another distinctive characteristic of the CRN 43 line, though it has become a standard feature on many of the shipyard’s superyachts, is the terrace at the owner’s suite, designed as a balcony large enough to hold a table and chairs for breakfast looking out on the ocean.