The Italian shipyard CRN has announced the launch of their latest superyacht, the 55 metre Atlante. Officially launched from the yard’s facilities in Ancona on the 9th May, Atlante marks the 134th hull in the brand’s history. Nuvolari & Lenard was responsible for her exterior design whilst CRN’s Engineering Department was in charge of naval architecture. 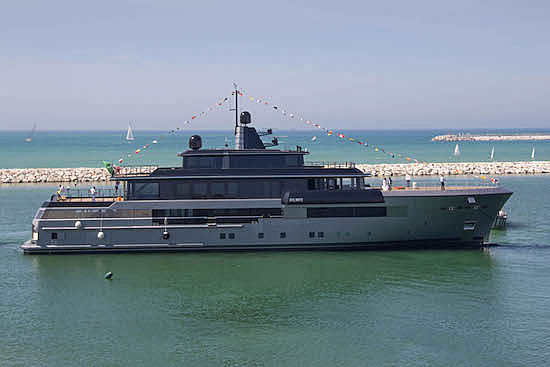 CRN’s Chairman and CEO Lamberto Tacoli says. “Launching a new yacht is always a moment of great pride for the entire shipyard as emotions go hand in hand with the satisfaction of knowing that each and every one of our products is going to represent our brand and Made-in-Italy yachting across the world’s seas.

“Atlanta is an extraordinary jewel - a very innovative one - we can truly be proud of. We are deeply grateful to the Owner Company for choosing us to build such an extraordinary yacht; to the design firm Nuvolari Lenard, that through Atlanta have once more confirmed their incredible creativity; and to all CRN’s workers and subcontractors who were involved in this project from its very beginning to its final completion.”

Architect Dan Lenard comments, “We conceived and created this new yacht together with CRN following the requirements of the Owner Company. The outer lines have been developed having in mind a specific final look - aggressive, but at the same time very proportionate. Seen in her entirety, this is a high-impact yacht, whose determined military look becomes soft on the sea. This is why we found some original solutions, such as a non-traditional bow and areas entirely devoted to guests, like the side doors of the main deck that, once the tenders have been launched, can be exploited to the fullest.”

The five deck yacht is equipped with two Caterpillar engines that push her to a maximum speed of 15 knots and a cruising speed of 14 knots. She will now undergo all final fitting-out activities and technical trials before leaving port and cruising in international waters.