CRN celebrated the baptism of its new steel and aluminium jewel, the splendid 60-metre superyacht MS, with a spectacular ceremony, followed by an exclusive party for 600 select guests.

The Middle Eastern owned MS, a fully customised displacement superyacht, is a result of the joint efforts of the CRN technical staff and the Zuccon International Project firm, which handled the external design; the interiors are the work of the J.L. Mainguy firm. 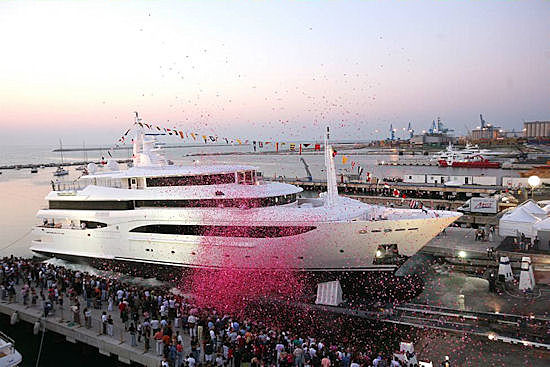 The layout of the yacht follows an innovative design, accurately reflecting the owner’s requests. Each of the five decks of the superyacht is “ranked”, with the importance of the guests increasing as one moves upwards, pyramid-style, all the way to the sun deck, where the owner’s night zone holds a suite capped off by a set of semicircular windows at the bow.

The open portion of this deck is designed for spending pleasant evenings in the company of others. Inside is a resin-surfaced dance floor and a large, fully outfitted bar. The owner also decided to lengthen the closed portion of the upper deck astern, creating a large panoramic lounge that measures approximately 150 m2, looking out to ocean views.

An attentive distribution of space has made it possible to create lodgings for no fewer than 38 crew members, in addition to the 18 lucky guests.

Even with its massive profile and majestic proportions, the vessel reaches a maximum speed of 17 knots and a cruising speed of 16.