The unstoppable production of CRN projects made with steel and aluminium continues. With the recent delivered of the 60 metre mega-yacht MY GiVi, there are currently other 4 displacement mega-yachts under construction on the shipyard, completely custom from 54, 57, 60 and 72 metres.

These vessels, which shall be launched within the next three years, along with the gliding line maxi-yachts in composite measuring 128 ft and 43 metres displacement, today they represent the true core business of the company, projected towards ever-ambitious goals and towards ever-demanding shipowners.

Thus, ever-bigger and prestigious mega-yachts combined with highly specialized labour and with an engineering department capable of developing “custom” projects internally, enable CRN to position themselves among the world market leaders on the extra luxury leisure boating sector.

The building of the CRN hull number 124 continues at full rate, a 72 metre mega-yacht, the biggest yacht in CRN history and one of the longest ever built in Italy.

The Clarena II, which is expected to be launched by 2009, is a completely new “custom” vessel, originated by the successful joint effort among the technical staff of CRN and the Nuvolari & Lenard Firm. 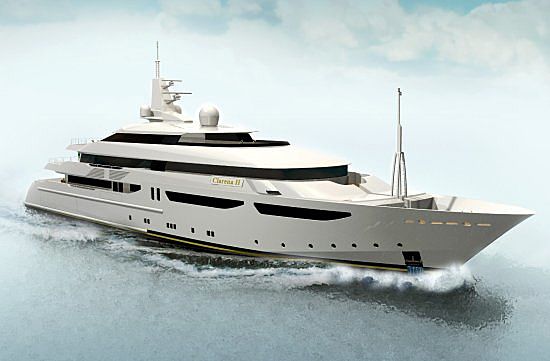 Developed thanks to the careful analysis of shipower’s requests, this project was able to make a vessel from sophisticated and innovative designs. The slender shape of the hull, together with specially modern and streamlined exterior, underlined from the marked and sharp bow, characterizes and at the same time distinguishes the Clarena II within the outline of mega-yachts of these sizes.

A true and complete gift for the onboard family life, the Clarena II has been developed to provide a perfect atmosphere of conviviality for guests, and to create a strong bond with the sea during different times of the day.

The mega-yacht has a completely innovative area at the stern of the lower deck, which shall be made into a real “beach club” with more than 100 square meters. In fact, the stern hatch coverts itself into a good size beach on the water’s surface, equipped with an external shower and a sun area that can be used by the guests as a solarium.

The first one to be launched into the water shall be vessel manufacture number 121 of the shipyard, a 54 metre mega-yacht, which is currently undergoing the completion phase for the painting and the preparation of the interior furnishings. A distinctive characteristic of this boat has to do with the small terrace on the captain’s suite, made as a real platform high up above the sea, this thanks to the use of a hatch that can be pulled down to 90 degrees and is made into a “balcony”. The vessel is expected to be launched in 2007.

The completion of the hull and the superstructure, and also recently the preparation of the systems for the 57 metre (CRN 122) mega-yacht has began, this vessel makes good use of the 54 metre ship platform.

The three extra meters, requested by the customer, have enable to broaden all the spaces of the stern: the two lounges of the main deck and of the upper deck, the wellbeing area on the lower deck and especially on the sun deck, where a big pool shall be made with a length of 5.5 metres and a width of 2.2 metres. A distinctive feature of this vessel that offers the guest is the possibility of swimming against the current, this thanks to a water jet with adjustable speed.

On the captain’s suite there is a small terrace high up above the sea, made like the 54 metre mega-yacht, this thanks to the use of a hatch that can be pulled down to 90 degrees.

At last, the assembling of the superstructure of the new magnificent 60 metre vessel shall be completed shortly, vessel manufacture number 123, the long-awaited launched is expected as the one for vessel number 122, by 2008.

The personalization of the internal and external layout of this mega-yacht is strong and innovative and takes the ship platform of the 60 metre GiVi.

In fact each of the five decks has a purpose that is almost “hierarchical” and as a ranking pyramid it accommodates guest gradually towards the sun deck, where there is the sleeping area dedicated for the captain, along with a panoramic suite overlooking towards the bow and surrounded by semi-rounded large windows.

Instead, the outer area of the sun deck was designed to spend pleasant evening moments with friends, and on the inside the sun deck there is actually a resin-made dance floor and a big bar supplied with all necessities.

The other important customize intervention has to do with the extension on the stern on the closed part of the upper deck, which has granted the establishment of a very extensive panoramic lounge of 141 square metres.