CRN has unveiled two new superyacht projects, designed by Francesco Paszkowski Design. The two yachts draw inspiration from the 61 metre Saramour, which was the first superyacht built by CRN in cooperation with Paszkowski. 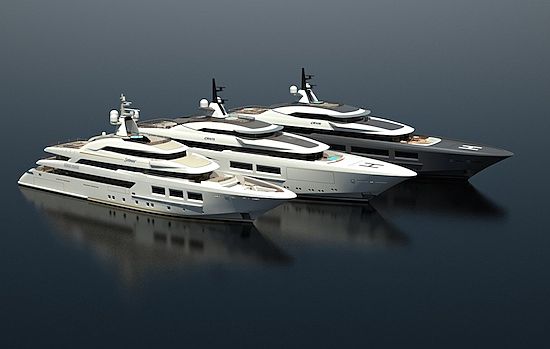 "Saramour was our first opportunity to cooperate with a prestigious shipyard like CRN and was a drive for us to jointly develop new, innovative ideas” - says Francesco Paszkowski - "These two projects are a natural evolution of the stylistic features of their 61m predecessor and the result of a deep analysis and an extensive research aimed at finding the perfect balance between outdoor and interior spaces".

"We are currently working on many new projects. With these two by Francesco Paszkowski, in particular, CRN is aiming to prove once more its flexibility and constant focus on aesthetic, functional, and technical innovation", concludes CRN's Chairman and CEO Lamberto Tacoli. “Together with Francesco we therefore want to widen CRN’s offer in terms of design, with projects that will turn into timeless superyachts characterised by huge interior volumes, which will be immediately recognisable across the globe".

The steel and aluminium 72 metre version, offers 6 decks, and includes 5 VIP cabins as well as an owner’s apartment, complete with a terrace and a private Jacuzzi. In another version, the owner’s stateroom is spread over two decks.

The 80.10 metre version, also offers 6 decks, and features 5 VIP cabins as well, all on the main deck. The onwer’s apartment is located on the upper deck, featuring a business area, a gym, and a massage room.

The 80 metre will feature a huge aft area, that will include three pools and a wide beach club. The latter comes in several versions, including one with a tropical garden.