The fourth CRN 128’ composite line was launched on February 26th at the CRN shipyard. Baptised Sima by the owner, the vessel slid into the water clad in the refined elegance of its blue composite hull. 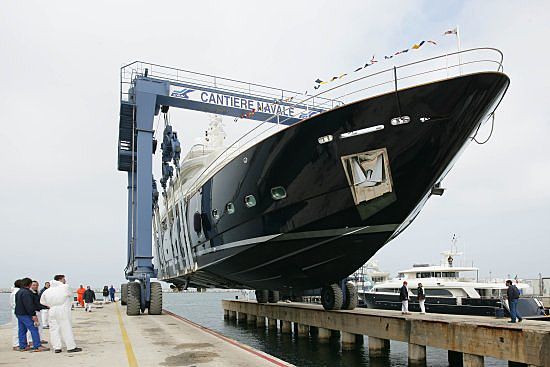 A ceremony was held to lauch this vessel, involving more than the breaking of a mere bottle of high-class champagne: at the request of the owner, the Sima entered the seawater after being christened in delicately fragrant rose water delivered especially for the occasion. A representative of the owner attended the thrilling launch, together with the CRN staff, always on hand for the ceremony that represents the crowning moment of a building process which began several months earlier.

The result of a successful joint effort by the technical staff of CRN and the Zuccon International Project firm, the CRN 128’ comes with features unique to the world of pleasure yachts. A majestic, one-of-its-kind layout with three covered decks and an innovative tender garage outfitted with side openings sets this line of vessels apart from other composite yachts of similar size.

Onboard living convenience and comfort blend in perfectly with the top-flight performance of a planing line able to cruise at a maximum speed of 24 knots and a cruising speed of 20 knots. Elegant and dynamic, the Sima has a beam of nearly eight metres and it can easily accommodate up to twelve passengers and eight crew members. The launching provides further evidence of the continued excellence and growth of the shipyard, now engaged exclusively in the construction of three-deck pleasure craft measuring over 40 metres in length. As a multi-brand production centre of the Ferretti Group, the Ancona shipyard is used to build not only maxi composite yachts and steel mega-yachts under the CRN brand name, but also Custom Line and Riva vessels for a total of 22 megayacts currently under construction simoultaneusly.

The day was a very special one for CRN, which, apart from the launching, is also engaged in the complex operation of moving the new CRN 43, the third maxi-yacht of the line, plus the Riva 115’, both of which shall be outfitted and completed at the Ancona shipyard.