This is the second part of The Lighthouse Consultancy’s series of articles focussing on cruising in Indonesia. After the last article featuring on Raja Ampat, this piece details the incredible Komodo National Park. The author Mike Veitch, works in close partnership with The Lighthouse Consultancy, forming part of the Consultancy’s extensive network of yacht support in the region. During the series, Mike and the Lighthouse Consultancy team will present more information about the various destinations within the country of Indonesia. The articles will highlight the top attractions in the areas, and provide valuable information about cruising logistics and planning that should be considered by anyone interested in visiting some of the most unique and intriguing yacht cruising destinations on the planet. 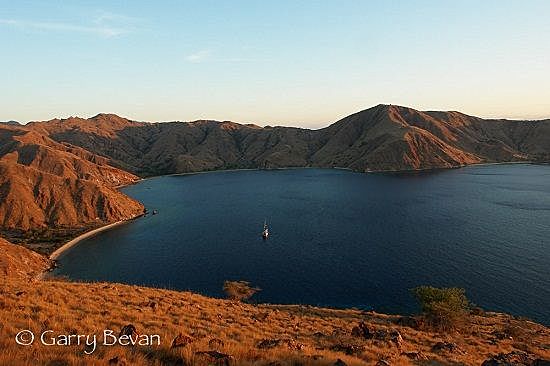 Recently recognised as one of the world’s new “Seven Natural Wonders”, the Komodo National Park is one of Indonesia’s most stunning attractions and offers a plethora of activities for the adventurous yacht. Consisting of the three large islands of Komodo, Rinca, and Padar as well as more than 20 smaller islands, the Komodo National Park is spread over an area of 1700 square kilometres of which 600 square kilometres is terrestrial. Due to the world famous Komodo Dragon (Varanus komodoensis) the world’s largest lizard, inhabiting several of the islands in the area, the region was deemed a National Park in 1980. In 1991, it was nominated as a UNESCO World Heritage site in order to help further protect its unique population of flora and fauna both above and below the ocean surface.

Situated between the major landmasses of Sumbawa to the west and Flores to the east, the Komodo National Park is surrounded by fast flowing currents exchanging nutrient rich water from the Indian Ocean in the south with the beautiful tropical Pacific water from the north. The mix of these two great oceans has created a unique marine environment that is as equally spectacular as the islands they surround. The blend of both underwater and land based attractions make the Komodo National Park a top yacht cruising destination with enough attractions to entertain guests of all ages on either a short or extended cruise itinerary. As the Komodo area is large, with many islands and a variety of “mini ecosystems”, it’s difficult to pick and choose the best attractions to visit. Here are ten of the most interesting and exciting adventures that the Komodo region has to offer.

An activity that should be at the top of everyone’s list: the opportunity to snorkel or scuba dive with graceful manta rays. The majestic manta ray can be found in many areas around Komodo such as Gili Banta, Gili Lawa Laut, Makassar Reef, and of course Manta Alley in the south of Komodo island. With a 14-foot (3-4 metre) wingspan and no stinging barbs or teeth, these gentle giants are often found feeding in large groups at the surface in shallow water areas which are perfect for snorkel or dive interactions. The sense of wonderment at seeing one of these giant aquatic bats gliding through the water, mouth agape, scooping in mouthfuls of plankton, is truly a life changing moment. 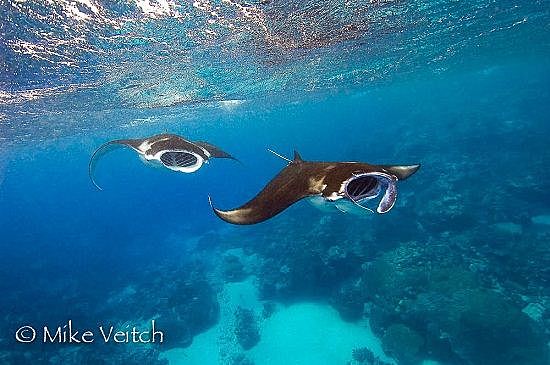 2. Hiking to the Top of Gili Lawa Laut or Gili Lawa Darat

One thing that the Komodo National Park is certainly not short of is stunning views! During the dry season, the islands in the area resemble an African savannah with a twist. The contrast of the arid brown islands, surrounded by rich blue water and shallow fringing reefs, offers endless opportunities for amazing landscape photography. Although the ascent to the top of some of the islands can be somewhat challenging, the treks along these well-worn paths are truly rewarding. The best time to tackle the climbs is early morning or late afternoon when the sun is not too hot; good shoes and sun protection are recommended. 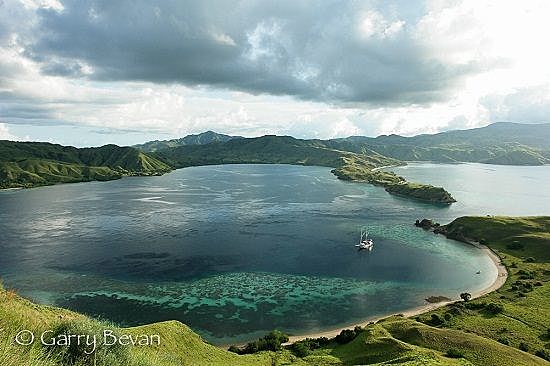 Nowhere in the Komodo area is the feeling of being in “Jurassic Park” more prevalent than in the iconic Horseshoe Bay at the far southern reach of Rinca Island. From the soaring mist covered peaks that surround this horseshoe shaped bay, through the Komodo Dragons pacing along the black sand beaches, to the deep green coloured water, the entire area pulses with a sense of the primordial. For terrestrial animal encounters, this is by far the best area in the National Park: monkeys, deer, wild pigs, and of course the endemic Komodo Dragon can be observed prowling the small beaches at all times of the day. Several species of large raptors, including kites and sea eagles, nest in the tall trees and are regularly spotted swooping through the air. Horseshoe Bay also offers some of the signature diving experiences in the National Park with several well-known dive sites such as Cannibal Rock and the Yellow Wall of Texas. The narrowness of the bay means that strong winds are in constant flux so vigilance is required when anchoring. 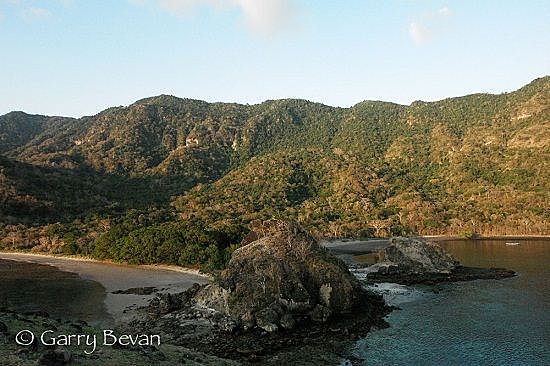 Although not officially inside of the boundaries of the national park, Sangeang Volcano lies just a few nautical miles to the northwest of Komodo Island and its conical twin peaks dominate the horizon during spectacular sunsets in the northern regions of the park. Sangeang is an active volcano that is covered in savannah-like grasses and is home to small local settlements living a subsistence lifestyle herding cattle and tending crops. In addition to a couple of small villages to visit, the towering 1,900 metre peaks are very impressive backdrops for a day of topside exploration and walks along the beach. Although Sangeang remains active, the last ‘big’ eruption which required the evacuation of the islanders happened in 1988. One of the more unique marine attractions of Sangeang is a dive at “Hot Rocks” where volcanic gasses are constantly bubbling out of the black sand sea bed. The sand is actually warm to the touch and there are several vents along the reef where larger “plumes” of sulphur enriched warm water pump out of the bottom. 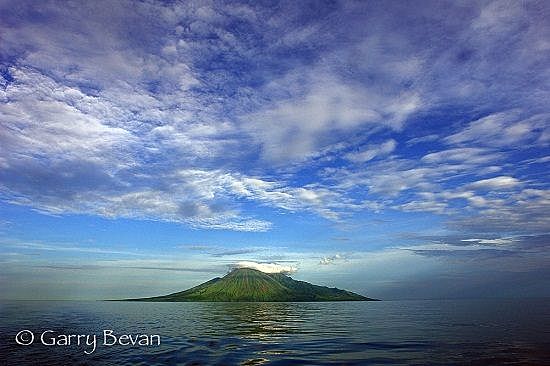 The majority of tourism in the Komodo National Park focuses on the western side of Rinca island or the eastern and northern edges of Komodo island, due in part to relatively calm water, but predominantly due to convenient access from Labuan Bajo town. For those looking for more adventure, the west coast of Komodo island offers miles of untouched beaches far from anywhere. With sweeping golden coloured sand, the bays and recesses along Komodo’s ‘wild coast’ offer pristine conditions for snorkelling, kayaking, and beach walking with ample opportunities to spot kites and sea eagles swooping through the air. From May – October the winds originate from the south and can create a reasonable sized swell along the west coast, so keeping an eye on the weather is of importance when cruising in this area. 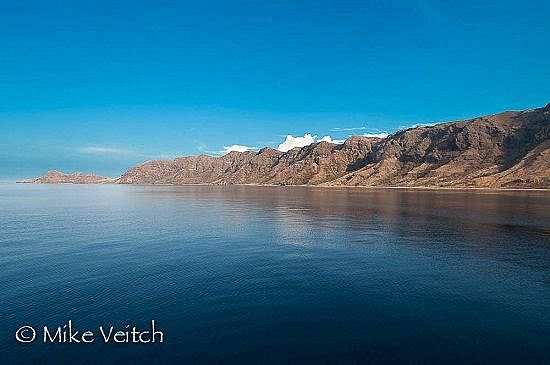 In the next part of the Lighthouse Consultancy’s Komodo National Park article, Mike will discuss Dragons, Traditional Villages and the exhilarating diving to be found in the area.

As with any cruise experience in Indonesia, exploring the Komodo National Park will require a visiting yacht to go through the process of acquiring a Clearance Approval Indonesian Territory (CAIT) and Temporarily Importing the vessel to be granted clearance into the country. This can seem a little complicated, but by providing the information and documentation requested by Authorities, as with Raja Ampat, the process can be completed with relatively few headaches.

Bali or Labuan Bajo
Komodo National Park is approximately 250 nautical miles from Benoa harbour in Bali. Vessels planning extended itineraries often choose to embark guests in Bali or Lombok, planning day excursions at luxury hotels (particularly the luxurious tented resort Amanwana, on Moyo island) and other interesting sites that are situated along the route out to the National Park. For shorter itineraries, to avoid the longer outward transfers and get into the world famous park boundaries and dive experiences from the start of the cruise, a short domestic flight to Labuan Bajo means guests can fly out to the vessel from the comfort and convenience of Bali, and potentially the same day be hiking to enjoy one of the stunning panoramas in the heart of Komodo National Park. It must be noted that the runway in Labuan Bajo is too short to accommodate the majority of private jet aircraft, but the Lighthouse Consultancy can arrange domestic charter flights from Bali upon request.

Tourism Permits
Komodo National Park is a protected marine reserve and as such, permits are required to cruise within park boundaries and vessels must check in to a couple of Ranger stations within park boundaries. Every visitor must acquire a number of permits for their visit to Komodo, as Park Rangers patrol the waters and could potentially visit the vessel and perform an inspection. These small monetary contributions are an essential funding source for the regional government and go towards financing the Ranger operation, which is integral to the fight to enforce the ban on all kinds of fishing within the park boundaries in a coordinated attempt to protect this natural wonder of the world. The Lighthouse Consultancy will assist with procuring all necessary permits for yacht crew and guests to visit the region and our guides on board will coordinate the necessary check in to the Ranger stations.