Luxury Yacht Builder Curvelle, will exhibit at the Abu Dhabi World Energy Summit in January with its designs for a new part solar, part diesel powered Superyacht. Curvelle was first superyacht builder to purchase the carbon offset credits for the design and construction of its 33X9 Superyacht catamaran which uses 30% less fuel than other motoryachts offering similar sized accommodation. 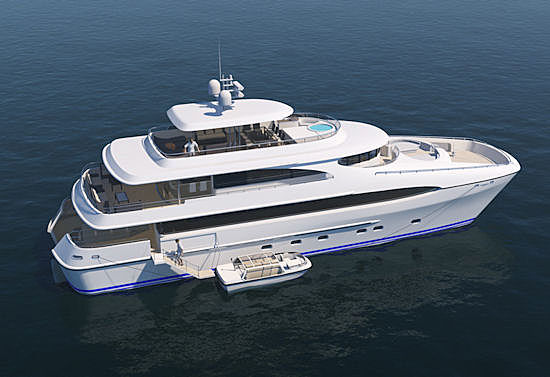 The company now intends to take the concept even further in its next generation of yachts as managing Director, Luuk van Zanten explained, "We are making huge efforts to produce yachts that are friendlier to the environment during both the build process and their ultimate use on water. We see future owners of large yachts being more responsive to fuel efficiency and keen to be seen to be as environmentally aware as possible. Our 33X9 Catamaran, which we will commence building this year, provides the ability to cross oceans using far less fuel than a comparable conventional hull. Our next design has a different target market, not as fast but with ground breaking advantages of joint solar and diesel power providing the ability to run silently for several hours a day on just solar power alone."

The new yacht will be launched at the World Energy Summit and later at the Abu Dhabi Yacht Show in February.