Based on the successful 110’, quaranta design, whose launch is imminent, the “Plus USA” shows off the same fluid lines by in house Italian designer and stylist Mauro Gamboi. Originally conceived by request from an American client, the Curvelle design team have refined the concept of “informal living”. 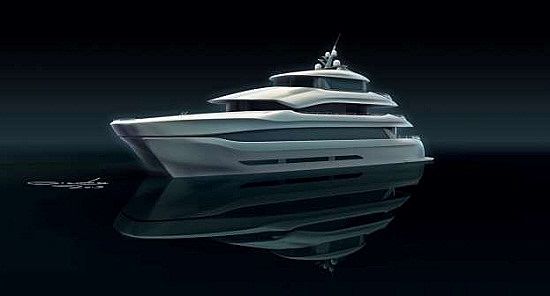 While the vessel has grown in length by 2 meters over her soon to be launched “sistership”, the largest difference is the layout of the upper deck , which has been enclosed to accommodate the pilothouse and a skylounge, allowing a “country galley” to be incorporated into the “main living deck”, forward, in place of the traditional wheelhouse location on a “triple deck” yacht.

“Americans tend to be less formal in their approach to boating” states Kevin Ralph, North American representative for Curvelle Yachts, “ and the informal “country galley” has become a staple part of the design in most American orientated vessels in this size range”.

Indeed the US version of the “Plus” features the eat-in, “country galley” forward on the “living deck”, which not only allows for a fantastic vantage point, with a 180 degree view forward, but also offers access to a large dining area on the raised foredeck, which can be covered by a sun shade, for great al fresco dining, while in port or at anchor.

While the quaranta Plus USA still retains Curvelle’s signature, large, on deck “convertible” guest cabins (4 in total) the forward section of the main deck has been designed as a palatial 760 sq. ft. owners suite, more akin to that found on 55m+ superyachts. With large picture windows and featuring a king size bed, dual walk-in closets, his and hers bathrooms, plus an ensuite study, in addition to the option of an adjoining gym/spa room, which can also be accessed from the companionway.

Moving the galley from the port hull, to the upper deck, also creates more space in the crew quarters, with the option to add an additional crew cabin for 2, giving the Captain his own double cabin in the starboard hull. Other features include a larger tender platform, which allows boats or submarines of up to 19’ (6.0m) to be lowered into the water, while doubling as a swimming pool/spa when in the water. The Curvelle naval architects, Incat Crowther, have also re-designed the hull form, allowing for a shallower draft to allow more extensive cruising in the Bahamas.