Built at the Ferretti Group’s shipyard in Mondolfo, Italy, the second Navetta 28 has been launched. The maxi yacht is the second in Custom Line’s semi-displacement series, making her debut at the last Cannes, Monaco and Genoa boat shows. Measuring 28.31 metres in length, the latest Navetta 28 has a warm metal grey coloured hull chosen by her owner. 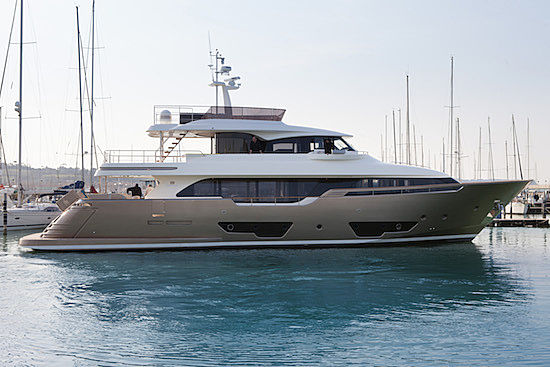 Her interior decor comes from the Dutch designer Eric Kuster, who worked in close cooperation with Centro Stile Ferretti Group and Studio Zuccon International Project, and boasts a wealth of fine materials and exclusive furnishings. Furniture is a skilful blend of Northern European and Italian style, with many of the yacht’s items exclusively designed by Kuster himself.

The layout has been partially modified, an example of which being found in the bar area located in the upper-deck living room, which is on the main deck of the first hull. This solution, together with the magnificent circular sliding glazing system, turns the upper deck into a huge open space overlooking the sea, which from the panoramic cockpit reaches the living area located amidships.

The sun deck - a private area exclusively reserved for the owner and his guests - has also been customised, installing the controlled-temperature Jacuzzi aft, rather than forward.

Over the next few weeks all technical operations - RINA (Italian Naval Registry) tests, sea trials, verification of onboard systems and equipment - and the interiors will be completed. She will then be officially delivered to her Northern European owner, where she will make her way to the south of France in time for the summer season.