The 51.30 metre superyacht Umbra is the second Sea Axe vessel built by the Dutch Damen Shipyards Group and has been slipped at Oceania Marine’s North Shipyard in Port Whangarei, New Zealand for major upgrades. The vessel was launched in 2010 and shadows a 57 metre explorer yacht. 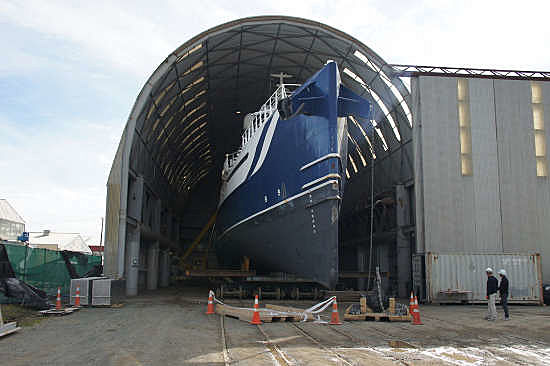 The project is scheduled to be completed within the next three months and includes a two metre addition to the stern and the fitting of a helicopter deck, as well as all of the equipment and infrastructure supporting helicopter operations. At the same time, a full exterior repaint in the owners chosen colours and vessel survey requirements will be done.

Project manager at Oceania Marine, Brent Charlesworth, explains, “We are working to a very tight schedule and have a lot to do within the time frame. As a consequence, we have put together a work team involving our best workers, sub-contractors and suppliers available from within Port Whangarei.”