Everybody onboard raved about the performance of the Damen 67 metre Sea Axe, now named 6711, reaching speeds over 22 knots. The advanced support vessel’s grey hull and white superstructure really shine and are faired and painted to superyacht standard. 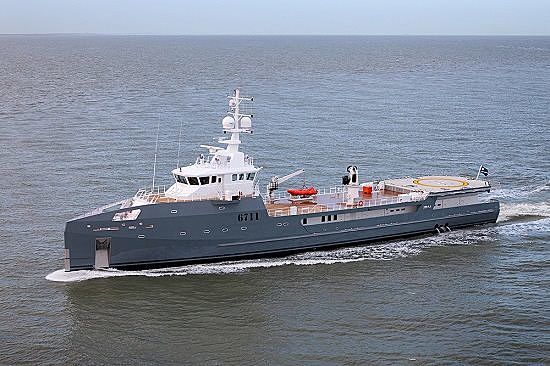 Due for delivery ahead of schedule in January 2014, 6711has been configured with an extensive dive centre, including its own decompression chamber. Deck space, excluding fully certified helipad - is an impressive 275 square metres.

Rob Luijendijk from Amels, commented: “We are seeing an increasing number of superyacht owners appreciate the benefits of a well-equipped support vessel customised to their particular requirements. This is why we are developing even larger options up to 90 metres in length. Damen has already delivered three yacht support vessels and has another four under construction.”

The 6711build project was managed by in co-operation with Imperial, the yacht management company which acted as the broker, Owner’s representative and construction project manager. Imperial’s technical team also made a substantial contribution to developing a state-of-the-art specification and additional outfitting.

Evgeniy Kochman CEO of Imperial commented: “This project continues a long-term co-operation between Imperial and Amels. The 6711 has been a very interesting project, a special type of support vessel with a highly customized and very practical layout whereas the building process at Damen the runs like clockwork”.