As the sea mist hung over the harbour, Day 1 of the Pendennis Cup began with a dramatic start in the Big Class as Adela, Mariquita, Mariette and Velacarina planned their approach to the start line. Mariquita was set flying with her working topsail and Mariette with the jackyard. With one minute to go all four yachts were on starboard approaching the line jostling for position with Velacarina to windward. 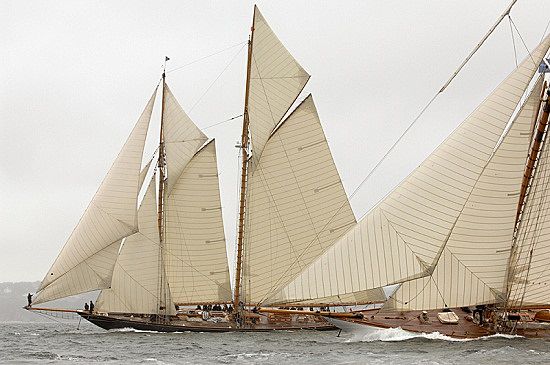 As the countdown commenced it was extremely tight with the red protest flags raised on three of the yachts and Velacarina hitting the pin as she crossed the line. Mariette held the lead over the line followed by Adela on the first beat to the windward mark towards the Helford River. 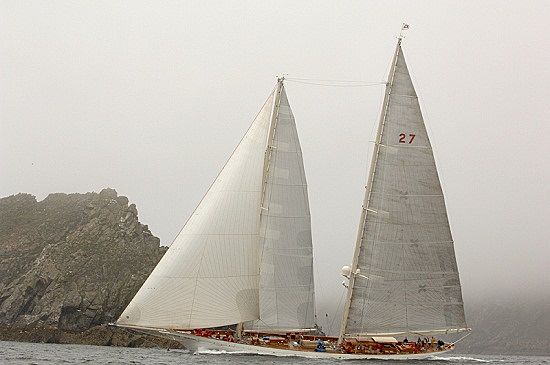 The small class followed 10 minutes later, a less dramatic start perhaps, but still a wonderful sight watching Pinuccia and Tomahawk dominating the harbour. Pinuccia was first over on port tack. However it wasn’t long before their class had its own drama as Tomahawk’s mast broke right at the top just as she approached the first mark, meaning she had to retire early. 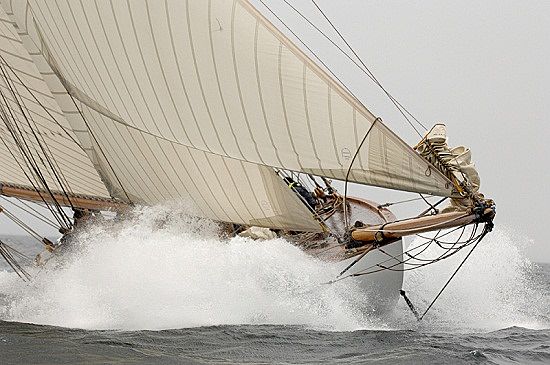 It was a dramatic sight as they passed between Gull Rock and the Roseland Peninsula, the fog-shrouded cliffs behind them. After passing round the mark Adela really took control of the race, taking a heading towards the coastline whilst Mariquita and Mariette sailed out to sea, planning for a later tack. Velacarina followed the coastal line too, but without the sail volume of the larger boats she fell behind. Adela soon disappeared off into the clouds towards the Manacles, whilst Mariquita and Mariette battled for second place. Mariquita tacked inshore to St Anthony lighthouse and took advantage of a wind shift opening up a good lead on Mariette, gaining on Adela.

Adela led the reach to the finish followed by Mariquita, Mariette and Velacarina. A superb day on the water not without drama with a steady wind all boats heeled over, cap rails in the water, providing a stunning sight for the following fleet of over 12 spectator and press boats. 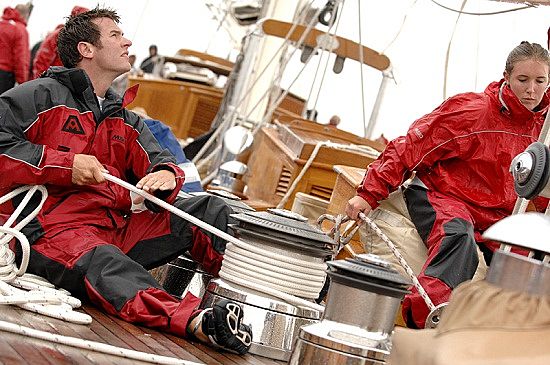 The second day of the Pendennis Cup once again started with grey skies and drizzle, however with a good wind it promised to be another day of close action around the course.

With Tomahawk’s mast being fixed in the Pendennis workshops and Pinuccia withdrawing due to stronger winds it was a day for the big yachts to show off their speed. Once again it was a close start with Adela and Mariette battling at the start line, both having good starts fully powered up as they crossed between the starting buoy and committee boat.

Mariquita reefed in her main to make the most of the winds but Adela took an early lead on the beat down to the first mark. As she rounded Helford she launched her spinnaker, providing the stunning sight of this beautiful 55.5m yacht in full sail. Mariette, Mariquita and Velacarina followed behind up to the second mark at Veryan, with Velacarina launching her mizzen sail on the downward leg. 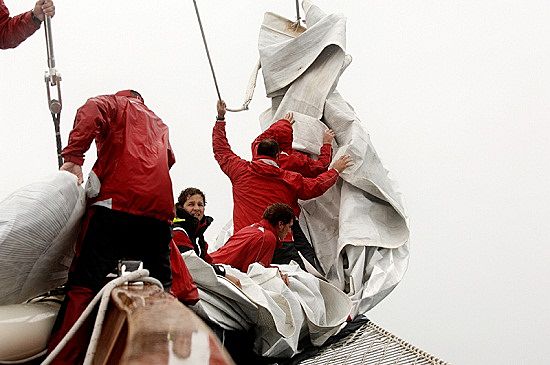 Adela had a strong lead on this leg however it was her turn to experience the unexpected dramas of racing as during a jibe her spinnaker wrapped and split, but she managed to sustain her lead down towards the Manacles mark. The spectator boat, with a top speed of approximately 10 knots, struggled to keep close to these amazing vessels as they powered down the course.

As the yachts rounded the final mark Adela held her lead, the sun shining through the clouds to light her way to the finish line. Mariette achieved speeds of over 16 knots was the overall winner of the day based on adapted time.