Yesterday, day 1 of the Loro Piana Superyacht Regatta 2011 in Porto Cervo, tested the 27 crew and their yachts to their limits, and beyond in some cases. Broken sails and halyard strops meant a busy evening for some crew as they worked to have their yachts ready for today's race, but the sailors relished the challenge of the changeable conditions all the same. 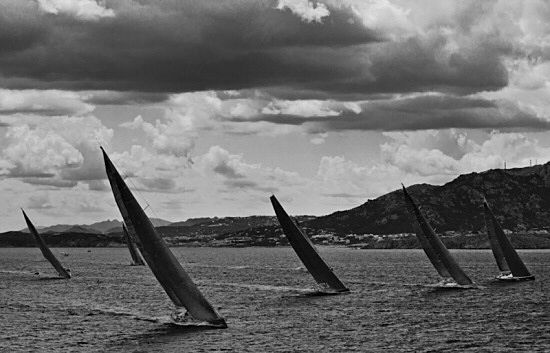 Owner of Wally Y3K, Claus-Peter Offen, enjoys racing in Porto Cervo for the breeze and for the competition. ‘It is good racing here against a good number of competitive boats, and we had tricky winds today which demanded last-minute decisions, and that’s what makes the racing here so exciting.’

A little too exciting at times in the Performance Division, as the fleet converged on the first windward mark all together. Four protest flags flew from different yachts and it was a late evening for the afterguard of some of the Performance boats, and also for the international jury who were tasked with deciding what, if any, penalties to applied to some near-miss incidents. ‘You have to expect this when you have boats of similar speed all racing competitively,’ said Offen. ‘It’s a sign of good close racing.’

The larger and less manoeuvrable yachts in the Cruising Division were governed by a new set of safety rules, including a 40 metre exclusion zone to avoid any close calls that could result in a collision. The 19 yachts in this division also started at two-minute intervals, the fastest setting out last.

Even if there wasn’t the boat-to-boat drama of the Performance Division, the wind had a few surprises up its sleeve. After virtually no wind at start time, the breeze built nicely to 15 knots, but later gusted higher. Just before the finish, a storm cloud just off the entrance to Porto Cervo caused the wind to turn through 180 degrees and created even more work for sailors on the foredeck as they scurried to change from spinnakers to headsails.

The owner of Marie, the 54.6 metre Vitters ketch, commented: ‘It was an exciting race with up to 25 knots of wind, which caused a lot of broken halyards and headsails. We broke our head sail early in the race during a tack.’ Timoneer and Saudade also had trouble with sails and halyards, pushing them back in the rankings on corrected time.