The first ever UK edition of the Superyacht Cup regatta started yesterday from the famous Royal Yacht Squadron, organised by Informa Yacht Group. Yesterday’s light wind conditions certainly did not affect the huge excitement building around Cowes, The Solent and the South Coast of England. 11 stunning Superyachts are divided into two Classes, Class 1 and Class 2. 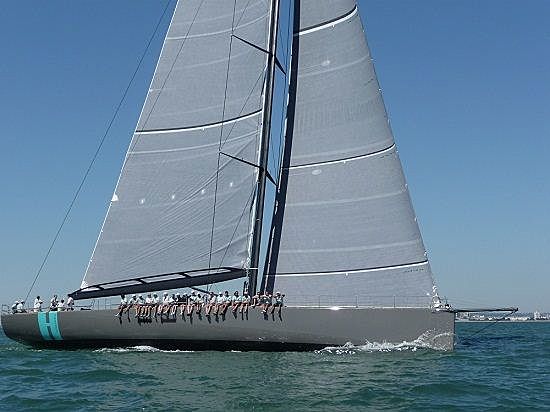 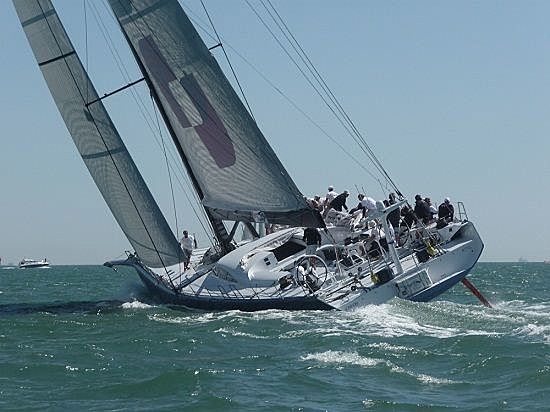 The first half of the fleet opted to head towards the mainland. It was apparent for those who hadn’t started yet that it was going to be a long day with such little wind, so Drumfire the 24m/78ft Sloop and winner of the SY Cup in Palma last year, decided to bite the bullet, opting to hug the island shore instead, as opposed to the mainland. This gutsy move quickly paid off and the remaining 4 starters Savana, Adela, Athos and Unfurled all benefited from it, following suit. 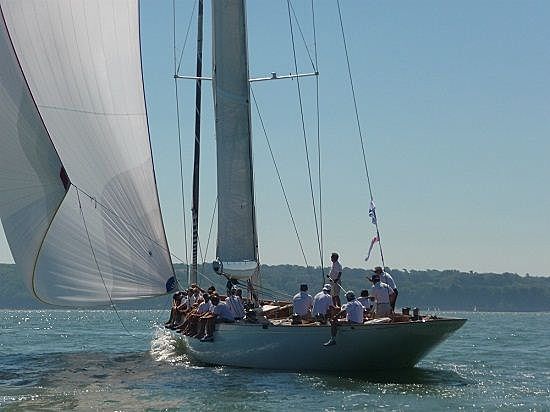 For some, Bare Necessities and Seaquell, racing was not made easy by such little breeze which was made all the more frustrating knowing that there was a race against tide also - to make it down to the first mark before the tide turned against them making progress even more difficult.

Athos seemed to be coping best in the light breeze, filling her enormous red spinnaker from the start and making good progress on the rest of the fleet. Unfurled then started and looked effortless in the light airs, opting for the island side as well, with slick successive gybes.

Meanwhile, the likes of Heartbeat, Drumfire and Savannah were enjoying a delicious lunch with an average boat speed of 1 knot – a good time for the chef onboard to emerge with large helpings of morale boosters! The race had at this stage been shortened to finish at the first mark. 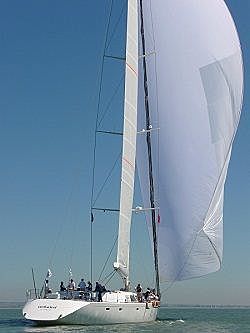 Each of the yachts had men up the mast looking for wind pockets ahead, the chap on Leopard 3 doubling up as an acrobat extraordinaire, flinging himself from the mast and landing feet first against the top two battens to pop them round after each tack. As the whole fleet almost all converged together between the Spinnaker Tower in Portsmouth and Ryde Pier on the Isle of Wight, the tide turned and the wind remained almost non-existent, meaning a battle of patience and skill was needed to break away. Unfurled found it first and she was off! The 112ft/34m German Frers designed sloop built by Royal Huisman proved herself in Falmouth a couple of weeks ago at the Pendennis Cup, and is set to do well again here, comfortably crossing the line first, followed by the amazing Leopard 3, who once she hit the breeze line accelerated at an incredible rate to reach 13 knots in less wind!

The next to break free was Athos who looked more and more likely to cross the line next, a couple of hundred metres ahead of the nearest contender to reach the breeze line, Hamilton, the brand new 100ft/30.5m Sloop built by Green Marine and designed by Judel/Vrolijk. However with a couple of tacks needed for the 203ft/62m Athos to make the finish line, a lengthy and timely process, Hamilton gave us a glimpse of what she will have to offer, picking up pace well and pipping Athos to the post!

The Superyacht Cup team, under James Pleasance’s directorship put on a superb BBQ at the historic Royal Yacht Squadron Pavillion for all the participants yesterday evening, a perfect setting for such a unique event. Today’s race starts at 1105hrs, with light airs forecast again.