There was some relief and no argument with principal race officer Peter Craig’s decision to cancel racing on day two of the Loro Piana Superyacht Regatta 2011 in Porto Cervo. The forecast for strong winds proved correct, and many sailors shared the race committee’s view that it would have been dangerous to send out these 27, predominantly cruising-oriented, large yachts into breeze gusting in excess of 30 knots. 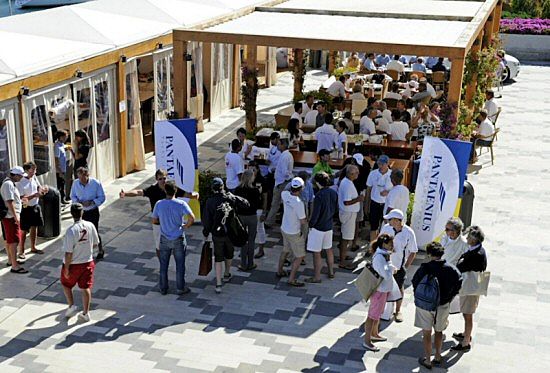 Italian America’s Cup veteran, Tomasso Chieffi, is tactician on board Pier Luigi Loro Piana’s My Song. ‘We all know it can blow very hard in Porto Cervo,’ he said. ‘This morning it was already blowing 25 knots in Bomb Alley and a sea breeze would have increased this to more than 30 knots. Yesterday some of the big boats were breaking stuff in 20 knots of breeze, so a good decision not to race. The next days look better, with wind expected from 15 to 20 knots. I believe it’s better to keep the boats safe today so we can enjoy great sailing on the next two days.’

This morning a number of protests were heard from race one the previous day. Magic Carpet 2was disqualified following a complicated port/starboard incident at mark one of the Performance Division’s first race.

Ganesha, which had won the Cruising Division’s first race on corrected time yesterday, was given a 10% time penalty after sail problems had forced the crew to resort to using the engine during racing. Harry Macklowe’s Unfurled now moves from 2nd into pole position in this 19-boat fleet.

Ganesha’s owner Dr. Peter Wacker commented:‘We had a series of problems that resulted in two men up the rig, and to keep them safe we felt justified under sailing instruction 5.1 to use the engine, although the jury disagreed.We fully respect the decision of the jury although we confirm that our interpretation of the rule differs. We think the final decision about safety should remain with those on board.’ Although Ganesha’s penalty relegated them from 1st to 11th in the race, Dr Wacker agreed with the intent of the new rules introduced by the Superyacht Racing Association in conjunction with the International Sailing Federation. ‘Overall the new rules increase safety when racing with these superyachts, but our wish would be that we get more clarification to avoid misinterpretation in the future.’

Race officer Peter Craig hoped that good lessons would be learned from the incident. ‘What Ganesha did, they believed was entirely within the new rules for superyachts, which have a large emphasis on safety and collision avoidance. There was debate as to whether they interpreted that rule correctly or not, and nothing is black and white in these cases.

‘This racing isn’t taking place under conventional racing rules, where you’re not allowed to use your engine under any circumstances. In these rules there is provision for times when you can use your engine, and it’s new. It’s not that they used their engine and tried to “get away with it”. They reported it on the declaration form as they should have, and the jury found that perhaps they interpreted the rule a little too loosely, I think. We learn from that experience and we try to keep the racing as safe as we possibly can.’

With the lack of racing yesterday, some Italian sailors went for a game of football, some British, Kiwi and South African sailors went for some touch rugby. Others preferred to attend a pasta masterclass with a 3-Michelin-starred chef from Restaurant Da Vittorio, hosted and organised by Loro Piana. In the afternoon, crew gathered for refreshments in Piazza Azzurra courtesy of Pantaenius Yacht Insurance and later this evening, Bob Oately hosts a cocktail at the YCCS to celebrate the formation of the new superyacht division at Audi Hamilton Island Race Week - Australia's premier sailing regatta.

As for racing tomorrow, the race officer was very optimistic. ‘It has every ability to play out in a great way,’ said Peter Craig. ‘Breeze maybe at the upper end for the cruising class, and great conditions for the performance class.’

Racing is scheduled to continue for day three and the forecast is for approximately 20 knots of westerly wind.