De Valk International has announced its appointment as co-central agent for the sale of the extraordinary 46.30-metre Lulworth. Originally launched in 1920, this classic cutter was meticulously restored during a five-year, multi-million-euro project and unveiled to the world again in all her authentic glory in 2006. Dubbed ‘The Restoration of the Century’, Lulworth was crowned Best Refitted Yacht at the World Superyacht Awards in 2007. 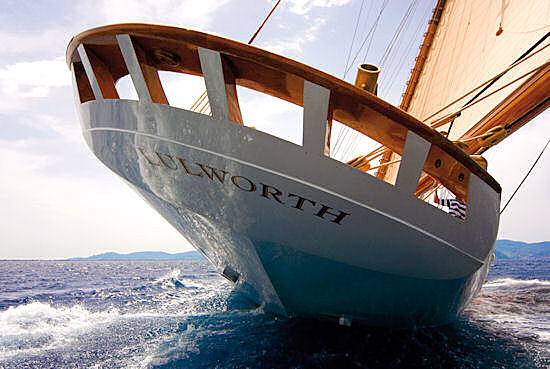 “Lulworth offers the perfect combination of regatta performance and fine sailing in the best golden age tradition,” says Derk Jan Rolff, the broker responsible for her sale at De Valk International. “She has won many races in the classic regattas, achieving speeds well in excess 20 knots. Lulworth has also been a fabulous yacht on which to cruise and had a successful charter record.”

After several marvelous years of racing and cruising, the owner is very keen to sell in order to focus fully on his land-based activities. “There is every chance that the new owner will not only come into possession of one of the world’s most beautiful sailing yachts but also have an excellent investment on his hands as soon as the market picks up,” adds Rolff.

“Lulworth would also be an ideal second yacht for a large motoryacht owner who wishes to experience some serious excitement and the allure of enjoying unprecedented access to the great Mediterranean harbours of Cannes and St. Tropez. She has such an aura that people on the quay always applaud when Lulworth arrives.”

Lulworth has been maintained in as-new condition by her full-time management team and crew, with constant updates in terms of sails and facilities to further enhance performance and comfort levels. The world's largest gaff cutter can be viewed in La Spezia, Italy.