The De Vries shipyard, one of the founding members of the Feadship organization, has been awarded the extremely rare designation of ‘Royal’ by Queen Beatrix of the Netherlands. This recognition of 100 years of yacht building excellence was officially handed over by the Mayor of Aalsmeer, the home of the De Vries yard since 1906. It means that both Feadship yards now carry the Royal title, with Van Lent having received the accolade in 2001. 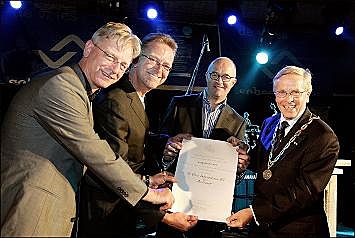 From left to right: Carel Meijers, Henk de Vries and Tom de Vries accept the official Royal designation from the Mayor of Aalsmeer.

The ‘Royal’ designation is a rarely bestowed honor in the Netherlands, granted only to companies that meet very strict criteria. These include being a leading exponent of the business sector concerned, being a company of national importance, and serving an important function within the community. It is therefore a definitive recognition of a company’s good standing and reputation.

The right to be called Royal (Koninklijke) is also only granted to companies that have been active in the same business segment and within the same family for 100 years or more. Johan de Vries, great-grandfather of the current generation running the family business, started building flat bottom wooden boats for the local community in 1906. Four of his sons went on to build pleasure craft, also for export, in the 1920s and 1930s.

After World War II, De Vries was one of the founders of Feadship, a Dutch export cooperation that has been market leader in the world of large custom-built motoryachts since the 1970s. Seven members of the fourth generation of the De Vries family are currently leading the 500 people who work for the De Vries Scheepsbouw group of companies. In addition to the ‘home’ yard in Aalsmeer, there are subsidiaries in Papendrecht (hull construction), Makkum (Feadship XL and refits), Leiden (aluminium, engineering, yacht equipment) and Heiloo (mechanical engineering).